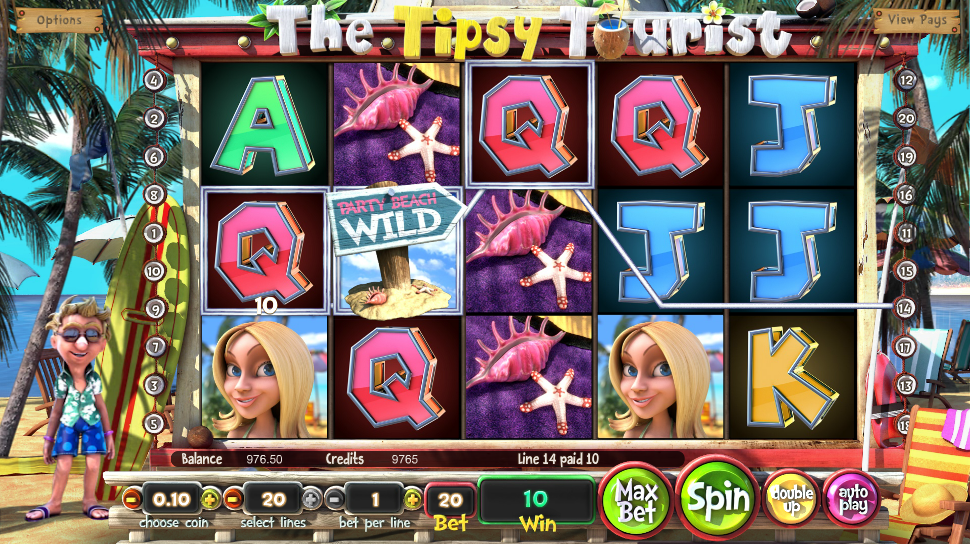 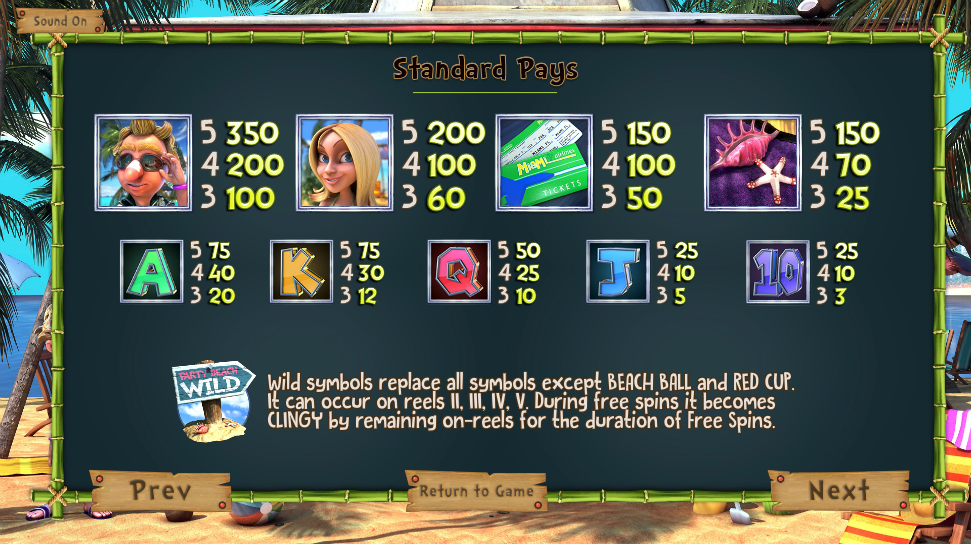 Our story starts in an office location as a jaded employee recognises the need for some well-earned rest and relaxation. We will call him The Tipsy Tourist and that’s also the name of this top notch online slot from Betsoft which follows our eponymous hero as he heads somewhere tropical to make the most of the cheap booze and the two bonus features. Read all about it below.

The Tipsy Tourist is a five reel slot with three rows and up to twenty paylines; a tropical soundtrack accompanies the gameplay and the reels spin on a large wooden sign which sits in front of a scene complete with palm trees, blue seas and the like.

There are four high value symbols and these include our sozzled hero, a blonde girl, plane tickets and some beach creatures; 10, J, Q, K and A make up the lower values.

The wild symbol is a sign to a beach party and it will substitute for all others except the scatter symbols- these are a beach ball and a cup of alcohol.

The cup scatter symbol appears only on reels one, two and three and if you can land three anywhere on those reels you’ll trigger this feature. It’s a coin tossing game between you and an opponent and winning the toss means the other guy has to drink one cup. When either player has finished all three drinks the round is over and the more coin tosses you win the greater the final prize.

The beach ball scatter symbols appear on reels three, four and five and landing three anywhere there will trigger the free spins. Initially you will receive eight free spins but more can be won during the round by landing three more scatters.

The wilds become ‘Clingy’ during this round meaning that if you land any they well remain in place for the duration of the spins.

Any base game win can be gambled using the ‘Double Up’ button below the reels and all you have to do is decide whether the next card drawn will be red or black.There is no limit to the number of correct guesses but a wrong guess will lose all your winnings.

It’s fair to say that Betsoft make some very good-looking slots and The Tipsy Tourist is as good as any; it contains clarity and complexity, two bonus features and an opportunity to gamble your winnings.