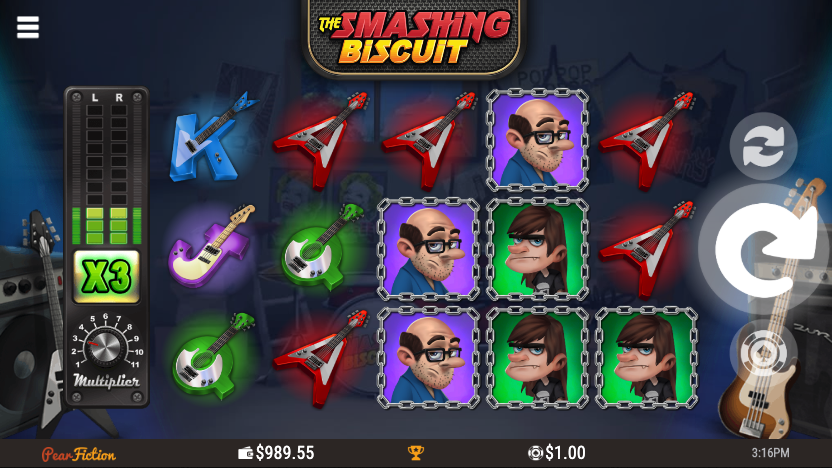 if you’re a fan of rock music and waiting for the next big thing then it’s probably not going to be The Smashing Biscuit, a band formed by the Biscuit brothers and the theme of this online slot from Pear Fiction; it has free spins and a clever multiplier feature which of course goes all the way up to eleven, Spinal Tap-style.

The Smashing Biscuit is a five reel slot with three rows and twenty fixed paylines; spin those reels and a guitar soundtrack bursts into life, blaring from the speakers on either side of the screen. The multiplier amp stands just to the left. 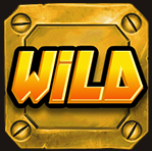 The four characters in this story are the oddly-named Tiny, Crunchy and Soggy along with their grumpy Dad; guitars formed into J, Q, K and A make up the lower values.

The wild is a golden ‘Wild’ which appears on reels one, two, four and five and it will replace all standard symbols to help form winning matches; the Battle of the Bands symbol is the scatter which activates the main feature.

Every winning combo will increase the multiplier value on the amp by 1x up to a maximum of 11x; unusually for a feature like this it won’t reset to 1x when you fail to win, it will just reduce by 1x to keep the momentum going.

This can occur randomly in the base game and Dad will wander onto the reels in his pyjamas and increase the win multiplier, award an instant win or activate the free spins.

Battle Of The Bands Free Spins 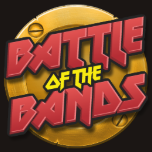 This is triggered by landing three of the Battle of the Bands scatter symbols anywhere on reels one, three and five; you’ll receive ten free spins initially but landing one, two or three scatters during this round will award an extra 2, 4 or 11 spins respectively.

The aim here is to form winning combos of matching band members which will then become wild until the spins end.

The Smashing Biscuit is a superb slot with a great narrative, some lovely graphics and a nod to all garage bands wherever they are; the wild multiplier crank up the wins and the tension while there are big wins to be had in the free spins round.