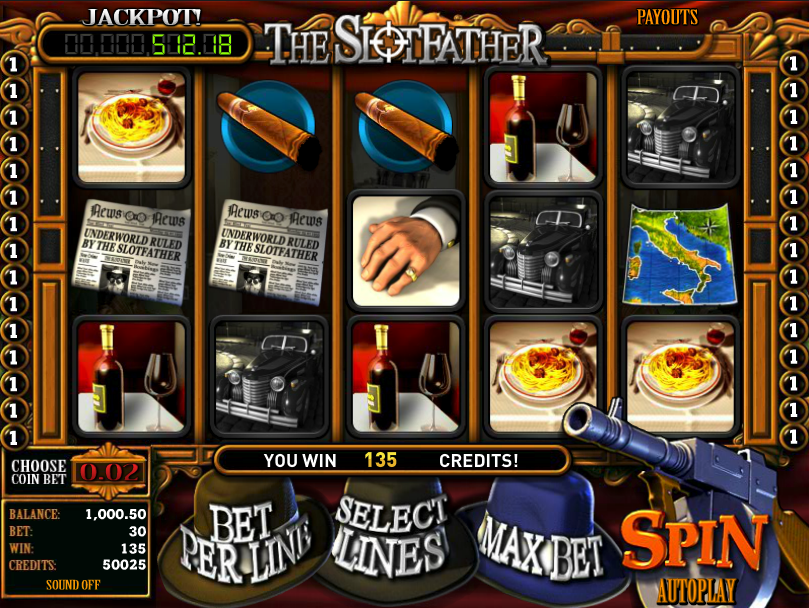 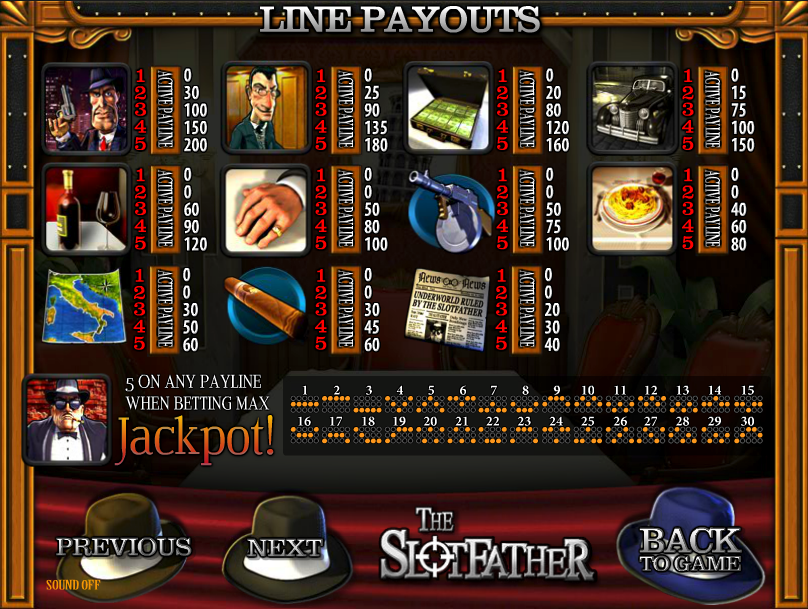 If the Godfather rules the world of organised crime then obviously it’s the Slotfather who runs the rule over the spinning reels and the bonus features. The Slotfather is the name of this Betsoft online slot which features some superb graphics as well as several bonus games and a progressive jackpot.

The Slotfather is a five reel slot with three rows and up to thirty paylines; those reels spin in an ornate wooden frame of the kind you might see in a mafia-owned establishment. There’s some entertaining Italian music to accompany your gameplay.

There’s a great range of theme-related symbols including the obligatory gangsters, a briefcase of money, a smart car, some wine, the bosses ring, a machine gun, a plate of pasta, a map of Italy, a cigar and a newspaper headline.

There is no wild symbol but bonus symbols include the Slotfather himself along with the gangsters, the briefcase, the Fat Gangster and the machine gun.

If you can land the gangster called ‘Sneeky’ next to the briefcase full of money on paylines one, two, or three you will trigger this mini-game. Sneeky will reach out and grab some cash from the case and it’s this which determines your instant win.

This is triggered by landing the Old Gangster next to the machine gun on paylines one, two or three and you will see the elderly crook grab the gun and fire it into the reels. Just pick one of those bullet holes to determine the number of spins (3 – 10) and the multiplier (1x – 3x).

Trigger this mini-game by landing three or more of the Fat Gangster scatter symbols anywhere in view; every high value symbol in view will now become a scatter symbol resulting in a large payout.

This game is triggered by landing three or more of the Slotfather bonus symbols on any active payline and the first thing you will be asked to do is select three of the six locations to place slot machines (see video above).

You’ll receive a prize associated with each location and then you’ll be asked to see the Slotfather who will also hand over a briefcase of cash to you.

You can see the total above the reels and the way to win it is to land five of the Slotfather symbols on an active payline.

The Slotfather is a fantastic looking game with a whole host of bonus features which all seem reasonably easy to trigger; add to that a progressive jackpot and this is one not to miss – check it out!