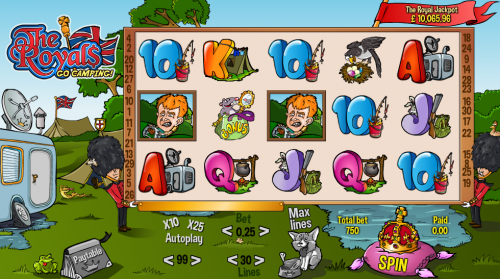 When you’re dreaming up a premise for a new online slot, how to you come to the conclusion that one based on the British royal family going camping is a good idea?  A royals slots game perhaps – a camping-based slot definitely but what happens when one puts the two together?

Surprisingly (or perhaps not), The Royals: Go Camping is an enjoyably daft experience featuring a number of amusing royal characters and it’s developed by Random Logic who now have the honour of creating the most strangely-themed slot.

Back to the game itself though and it features five reels and  thirty paylines; two beefeaters support the reels and both have animals nesting in their bearskin hats. Strewn around the background is a wide variety of camping paraphernalia – a beaten up caravan, tents and an obligatory corgi.

Even the lower value symbols – 10, J, Q, K and A – are adorned with camping accessories but we have a range of higher value ones which include the Queen, Prince Charles, Harry, William and Kate. The wild is a raven sitting on a wild crown and the bonus symbol is a similar bird on a gold crown.

The Royals Go Camping features a number of bonus games as described below:

If you can land the bonus symbol anywhere on reels one and five on the same spin you’ll get to play this game; two Pick Me symbols appear on the reels and you just need to pick one to reveal a prize.  If you’re lucky you may get one more chance at a pick.

This is about the royal family and it’s only right that the Queen is the focus of this mini-game.  You’ll need to land three of the bonus symbols (right) to trigger it and your task is work your way up through the levels to find her lost purse.  The further you get the more you win.

If you can land the wild symbol on reel three it will expand to cover all positions on that reel, giving you many more chances of creating winning combos.  As an extra bonus all wins with the expanding wild are doubled.

A huge progressive prize is available when you’re playing this game and it’s called the Royal Jackpot; you can see it increasing in value as you play the game and all players have a chance of winning this randomly awarded prize.  More paylines and a higher stake amount mean a better chance of winning.

What a game! It involves two traditional British pastimes – camping and the royal family so what’s not to like?  Amusing graphics and a generous number of bonus features mean it’s a top quality slots experience.