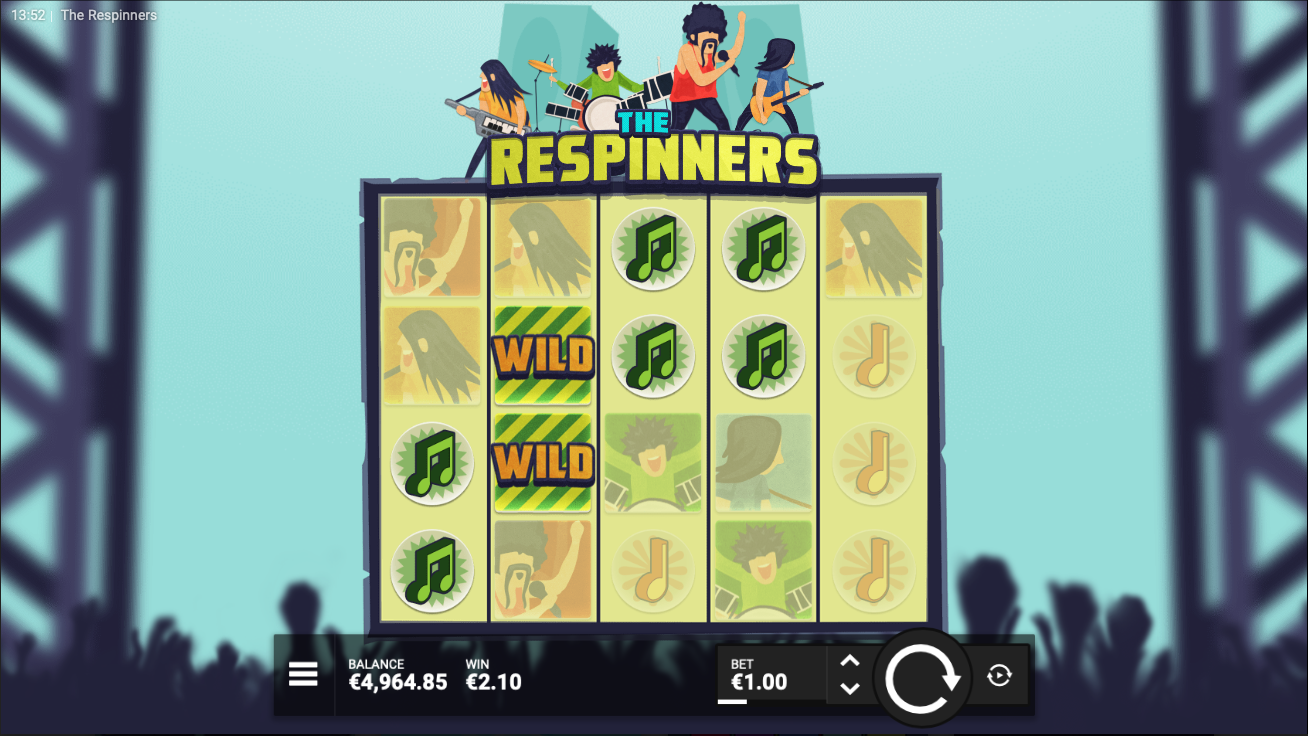 The roar of the crowd in the auditorium greets players as they load up this online slot from Hacksaw Gaming – it’s themed on a rock band called The Respinners and from £0.20 per spin it provides us with some laid back tunes as well as respins, free spins and a feature called The Crowd Goes Wild.

The Respinners is a five reel slot with four rows and 1024 ways to win; our gang of hirsute crooners strut their stuff on top of the reels which itself is perched above the heads of the bobbing, silhouetted crowd.

The four band members are the higher value symbols while a selection of five coloured, musical notes make up the lower values; the ‘Wild’ is obviously the wild and there are no other special symbols.

Every time you land a winning combination involving one of the band members this feature will be triggered and a fee spins is awarded; nothing locks in place, it’s just a simple extra spin.

This is activated at random in the base game and up to twelve wild symbols will; be added to the reels, hopefully resulting in a nice big win.

This is triggered by landing a spin or respins which includes wins with every band member; you’ll now receive twelve free spins and during this round every musician has an attached multiplier which will be applied to any wins formed with that chap. On the next spin the multiplier will be increased by 4x.

Like all Hacksaw Gaming slots, The Respinners is simple and engaging at the same time; along with a musical accompaniment there’s plenty going on in the base game but the free spins seem to be where the big wins are.

The Respinners is a music-themed five reel slot with four rows and 1024 paylines.

Yes! Base game respins and wild features along with free spins and win multipliers.

The Return To Player percentage for The Respinners is 96.40%.

How To Win On The Respinners?

Land at least three matching symbols starting from the left hand side; trigger the respins or free spins.

Where can I play The Respinners?