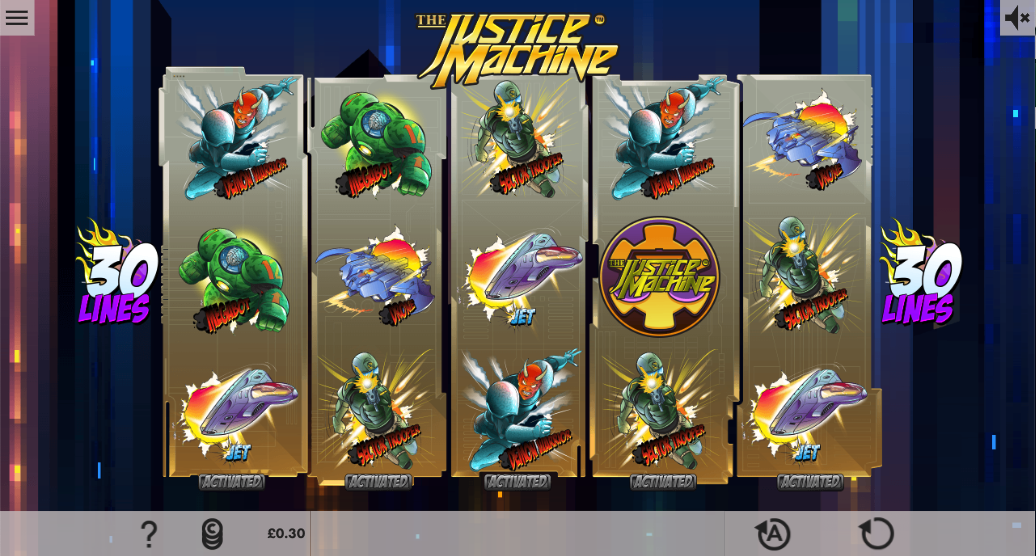 The world is awash with groups of superheroes these days but if Marvel’s Avengers or the Suicide Squad can’t help save the planet then perhaps The Justice Machine can – they’re the theme of this online slot machine from 1×2 Gaming and they spend their days trying to help you win cash prizes.

The Justice Machine is a five reel slot with three rows and thirty fixed paylines; dramatic music accompanies your gameplay which takes place on fast-moving reels in a cartoon-esque environment filled with heroes and villains.

All the symbols are related to the theme and include our heroes – Talisman, the Demon, Blazer, Chain and Challenger – as well as the Sector Trooper, the Drone, the Megabot, the Jet and the Justice Machine logo.

Titan is wild and he’ll replace all standard symbols to help form winning combinations; Diviner is the bonus symbol which will activate one of the features.

Occasionally on a spin one of the reels will be activated and if a superhero lands on that reel the following features will be awarded:

The Justice Machine is a very fast-moving slot which fires feature wins at you with a refreshing regularity; leave the sound on to keep the action cranked up or turn it off to preserve your sanity – the choice is yours. This game comes with an RTP of exactly 96.00%.