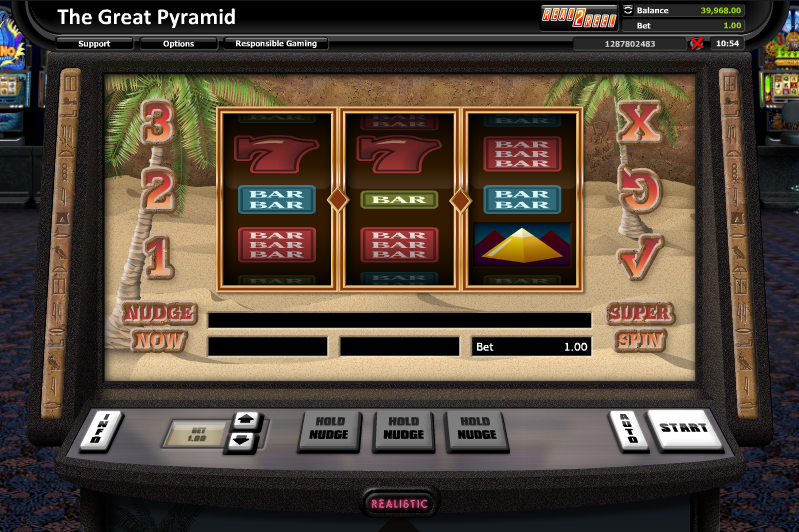 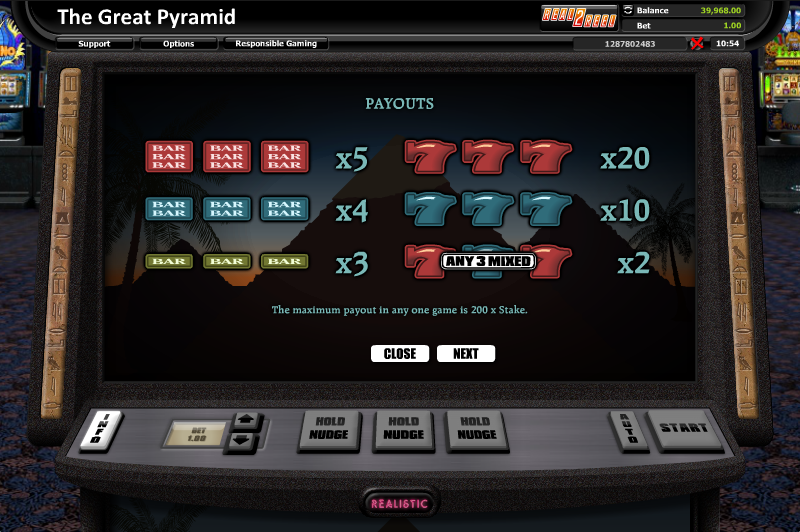 Realistic Games are well-known for producing a range of online slots which are designed to make you feel as though you are actually in a casino. The Great Pyramid is another addition to that high quality line-up and it also adds to the ever-growing list of Egyptian-themed games. Keep reading for more information about this classic offering.

The Great Pyramid is a three reel slot with just one payline and the game is designed as a replica of a casino machine; the buttons are where you expect them to be below the reels and you get a narrow view of the rest of the casino to either side of the cabinet. A strip of hieroglyphics next to the reels adds an Ancient Egyptian touch to proceedings and behind them there’s some sand and palm trees.

The symbols are of the traditional variety and include red/blue sevens and single/double/triple colour coded bars. The bonus symbol is represented by the pyramid.

The Great Pyramid Bonus Round 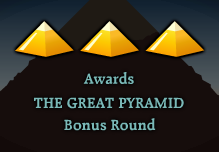 Landing three of the pyramids on the payline will award this extra feature and the screen zoom out so you can see the top of the machine. Here you can see a pyramid containing x2 bank notes; you have already won those which are lit from the bottom but when there’s a gap you must press the button to try and light that space also. You’ll get three tries but if you fail the round is over but you keep what you’ve won so far.

During gameplay you may be randomly offered nudges or holds:

This is offered randomly after a losing nudge and it guarantees a winning spin. That win can also include three pyramids which will trigger the Bonus Round.

Always let the game Autonudge for you; it’s quicker and easier than trying to do it yourself.

We always like a three reel slot with some bonus features. they remind us of UK-style fruit machines and wasted days in the pub. There’s a decent RTP of 95.20%.