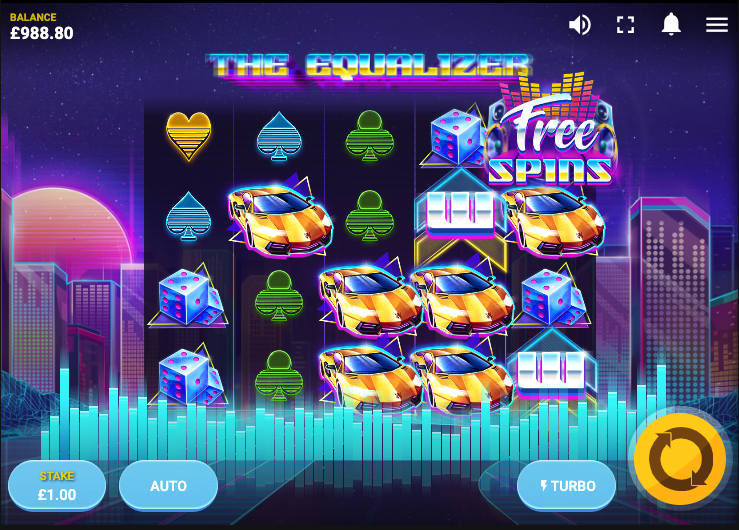 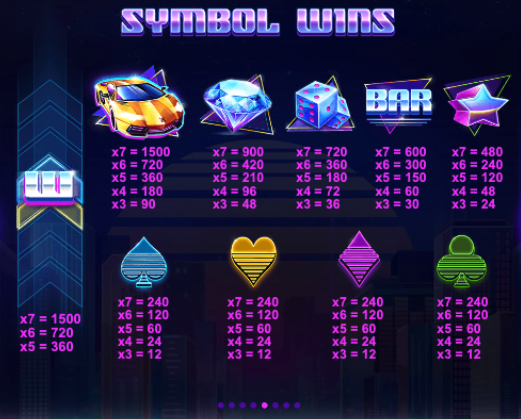 Edward Woodward and Denzel Washington are nowhere to be seen in The Equalizer, an online slot machine from Red Tiger Gaming themed on electronic music rather than brutal vengeance – it offers players expanding wilds, expanding reels and free spins.

The Equalizer is a five reel slot with four rows and thirty paylines in the base game; a synthesised soundtrack accompanies your gameplay which takes place against a backdrop of a neon city under the night sky.

The high value symbols are all very shiny and include a fast car, a diamond, a pair of dice, a bar and a star; playing card symbols in blue, yellow, purple and green represent the lower values.

The silver ‘W’ is wild and will replace all standard symbols to help form winning matches – wilds may expand up to six positions high after the spin has finished. The Free Spins symbol activates the main feature.

This occurs randomly in the base game and up to two extra reels and rows may be added to the current setup, increasing the potential number of paylines to sixty.

This is triggered by landing at least three Free Spins symbols anywhere in view for which you’ll receive ten free spins; during this round every wild will be locked in place until the round ends, even if they’ve expanded – extra rows and reels will also remain in place if they occur.

There’s also a Sound Wave feature during this round in which the speakers to the sides of the reels will blast wild symbols into random positions. Landing the ‘extra spin’ symbol will award an extra spin each time it lands.

There’s a refreshing, retro feel to The Equalizer which is only enhanced by the 80s-style electronic soundtrack – chuck in several clever bonus features and the result is a slot which is a pleasure to play and an assault on the senses at the same time.