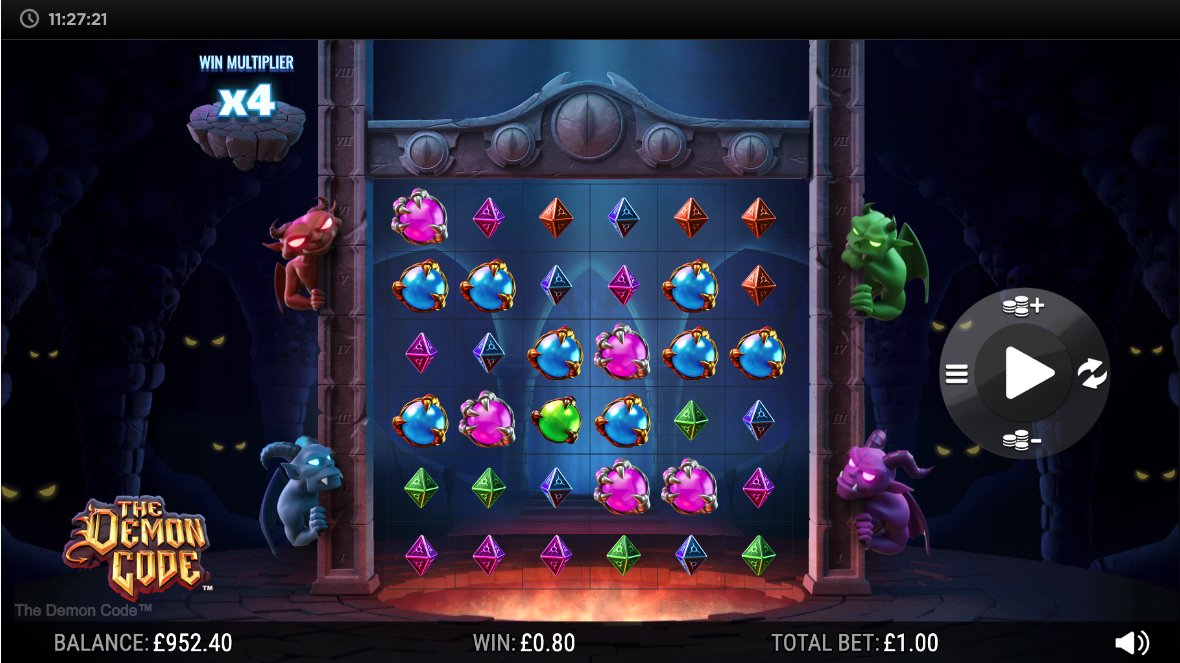 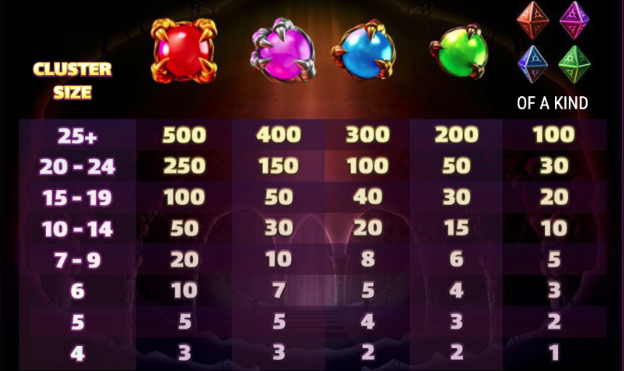 Pairs of glowing eyes stare out of the darkness as you start to play The Demon Code, this online slot from NextGen Gaming; it’s all about several demons who have the ability to award their own features along with some scary free spins.

The Demon Code plays out on the 6×6 grid you can see above and the aim is to form cluster of at least four symbols which match horizontally and/or vertically; cascading reels are also in play which means that any symbols in winning combos will disappear and be replaced by more falling in from above, giving the opportunity to create new combos to continue the fun.

All the action takes place is some gloomy underground area in which demons cling to the stone-rimmed reels which hang over a fiery abyss.

The four high value symbols are orbs in red, purple, blue and green, grasped by demon claws; four geometric shapes in similar colours represent the lower values. The golden ‘W’ is wild and it will substitute for all others except for the demon eye scatter to form winning matches.

If there’s at least one wild symbol on the reels after a non-winning spin t will explode, taking with it all surrounding symbols and perhaps causing a successful cascade.

Win multipliers start at 1x and increase by 1x with every successful cascade or trigger of the Enter The Void Feature; it will reset back to 1x when there are no more cascades.

There are four talismans which represent each demon and they may appear on the reels at random, triggering the following feature:

This round is activated by collecting four scatter symbols during one spin and they’ll fly off the screen and occupy the smaller eyes above the reels; wild symbols will appear in their places. Ten free spins are the reward but there are two more for each extra scatter collected.

During this round every four scatter symbols collected will add an extra row to the grid up to a maximum of twelve and award two extra spins; if the rows reach their maximum level another four scatters will increase the in multiplier by 10x along with awarding two more spins.

The Demon Code may not be for the slot purists but it’s great fun for those who want a bit of cluster and cascade action; small wins and features hit constantly to keep things interesting but the biggest wins are saved for the free spins.