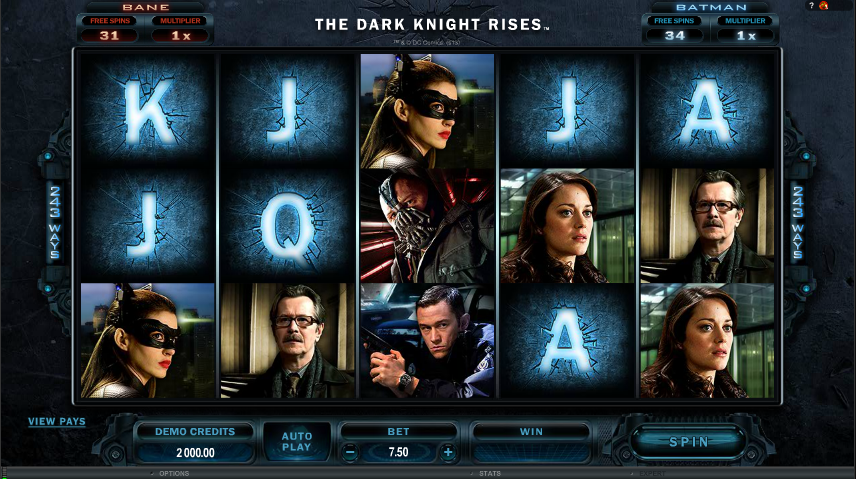 You may be familiar with the range of Marvel superhero-themed slots from companies such as Playtech and Cryptologic but it’s Microgaming who have negotiated the rights to produce The Dark Knight Rises.  Batman is of course a DC Comics creation and a flagship character from that studio and this slot is based on the 2012 Warner Bros film.

This slot is a bonus-packed game which features five reels and 243 ways to win; it’s got a gloriously gloomy atmosphere which is right in keeping with the more recent Batman films.  This is not a cheerful game but it’s of such quality that it’s hard to stop playing.

The major symbols are Batman, Bane, Cat Woman, John Blake, Miranda Tate and Commissioner Gordon while the lower value ones are J, Q, K and A.  Special symbols are the bomb scatter and a Dark Knight Rises logo wild.

The free spins round is described below but the number of free spins you receive is determined by the outcome of fights between Batman and Bane.  During the base game they will occasionally brawl their way across the screen, winning spins and multipliers by landing blows on each other.

Large numbers of free spins can be accumulated in this manner as you can see from the video below.

To trigger this bonus round you’ll need to land three of the bomb scatter symbols anywhere on the reels.  You will now get the chance to choose Bane or Batman free spins.

This feature occurs randomly on any non-winning spin; the screen will shake and the symbols will rearrange to form the best possible winning combinations.

Land the wild on reel three and it will expand to cover the entire reel, leading to lots more winning chances.

This is a great release from Microgaming which certainly reaches the standards of the best Marvel slots; loads of bonus features, a dark brooding atmosphere and soundtrack and some top notch animations make it a winner.