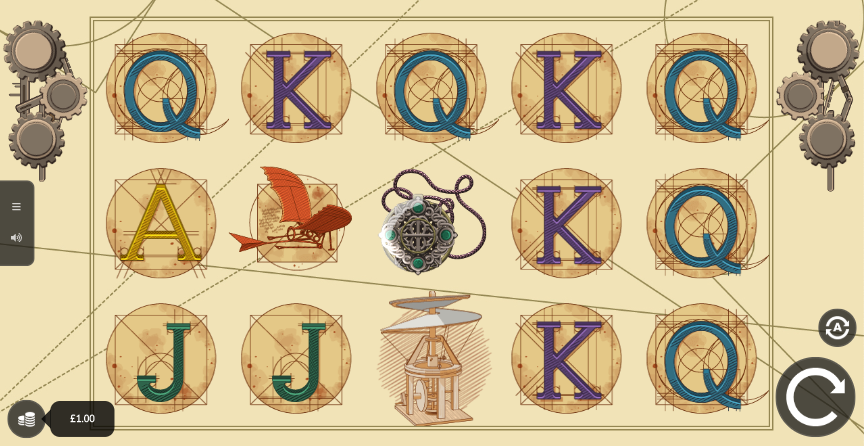 Leonardo da Vinci was one of the great artists and scientists of the renaissance era so he would surely be delighted to know that 500 years later he has an online slot machine in his name; this one’s called The Da Vinci Device and it combines some of the great man’s inventions with some clever bonus features.

The Da Vinci Device is a five reel slot with three rows and 243 ways to win; those reels are designed to replicate one of Da Vinci’s plans laid out on parchment with moving cog wheels in the corners.

The theme-related symbols here include a globe, a self-portrait, the Mona Lisa, a 3D model, a pendant, a helicopter plan and an early flying machine; J, Q, K and A make up the lower values.

The picture of the Vitruvian Man is wild and it will substitute for all standard symbols to help make winning matches; one scatter symbol represented by part of a device (the Cryptex) appears on each reel.

This is triggered by landing three, four or five of the scattered device parts anywhere in view for which you will receive 8, 12 or 16 free spins respectively; during this round multiplier wilds are added to the reels which will multiply any wins by 2x, 3x or 4x – only one of these wilds can be used at any one time.

The attraction of The Da Vinci Device is in the pared back design which replicates some of the inventor’s famous designs along with the requirement to collect various parts of the Cryptex to trigger the main feature; it’s an interesting and well-designed slot.