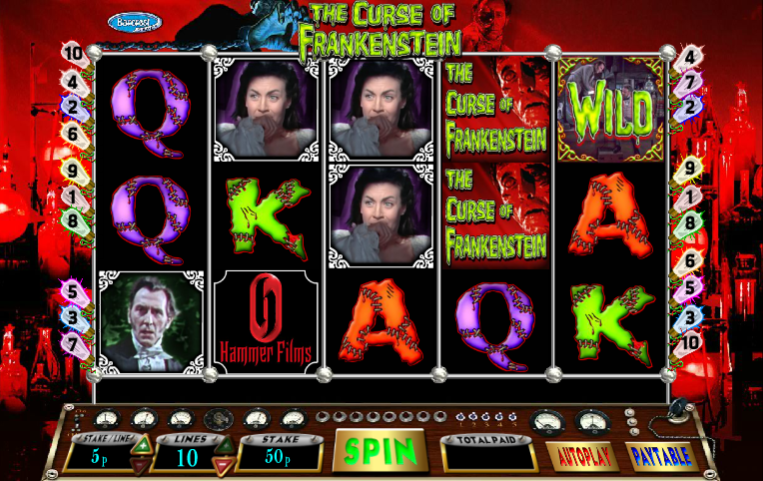 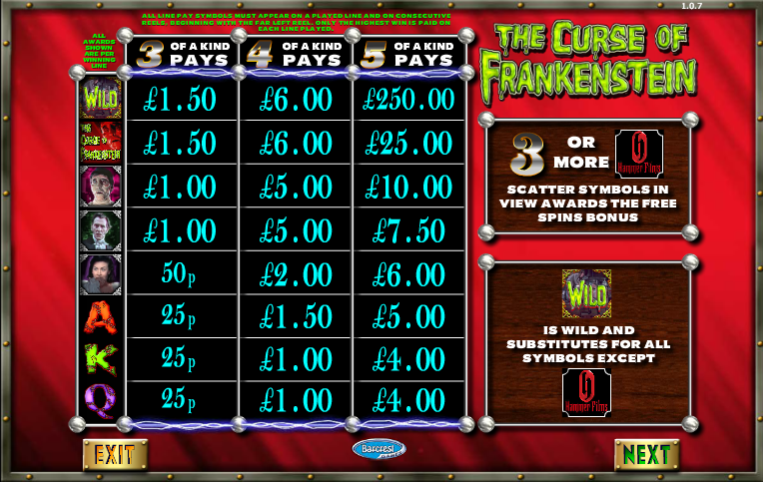 For fans of Hammer Horror films, The Curse of Frankenstein is one of the classics from Hammer Film Productions, it was released in 1957 and it was the first colour horror from this famous studio. It stars Peter Cushing and Christopher Lee and it is of course based on Mary Shelley’s novel. This online slot shares the same name as the film and it also shares some of the graphics which marks it out among many movie tributes. You can read all about it below.

The Curse of Frankenstein is a five reel slot with three rows and up to ten paylines; those silver-famed reels are set against a backdrop of blood red laboratory equipment. Some of the film’s original music plays along as you spin the reels.

There are four high value symbols including the game’s logo, Frankenstein’s monster, Dr. Frankenstein and his cousin Elizabeth; Q, K and A represent the lower values.

The wild is a big green ‘Wild’ icon and it will substitute for all others except the scatter symbol; that scatter is represented by the Hammer Films logo and you will need it to activate the main feature.

This is triggered by landing three, four or five of the Hammer Film scatter symbols anywhere view; for this you will receive 2x, 25, or 100x your total stake respectively.

The best thing about playing The Curse of Frankenstein is the use of some of the original imagery and musical score from the film; the game itself would be a little bit basic without this  but overall it’s worth checking out. The bonus feature seems to offer some earning potential and there’s an RTP of 95.02%.