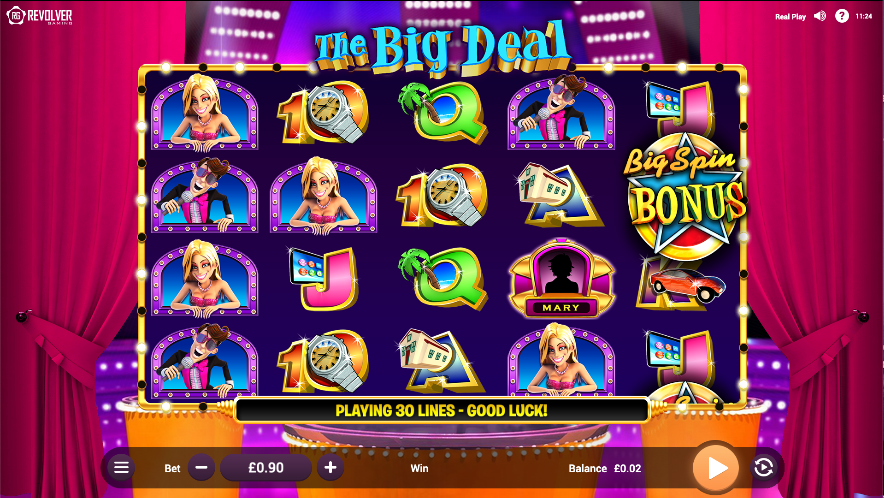 The lights, glamour and cheesy grins of a television studio form the backdrop to this quiz show-themed online slot from Revolver Gaming; it’s called The Big Deal and it offers players a Wheel of Fortune bonus feature with six different glitzy prizes.

The Big Deal is a five reel slot with four rows and thirty fixed paylines; a jaunty tune accompanies the gameplay which takes place in the brightly-lit studio with plush red curtains on either side of the contestants area.

The high value symbols include The Big Deal logo, the quix master, his glamourous assistant, a pile of cash and the two contestants, Mary and James; 10, J, Q, K and A, accessorised with prizes, make up the lower values.

The wild is a big, green ‘Wild’ which appears stacked on the reels and which will substitute for all standard to help form winning combos; the blue star is the bonus symbol.

This is triggered by landing at least three of the bonus symbols anywhere in view and you’ll now get to spin the big wheel which will reveal one of six prize features:

The Big Deal is certainly one of the better game show-themed slots we’ve played and we particularly like the wheel which determines the features and the relative ease of triggering the bonuses – it’s good fun.