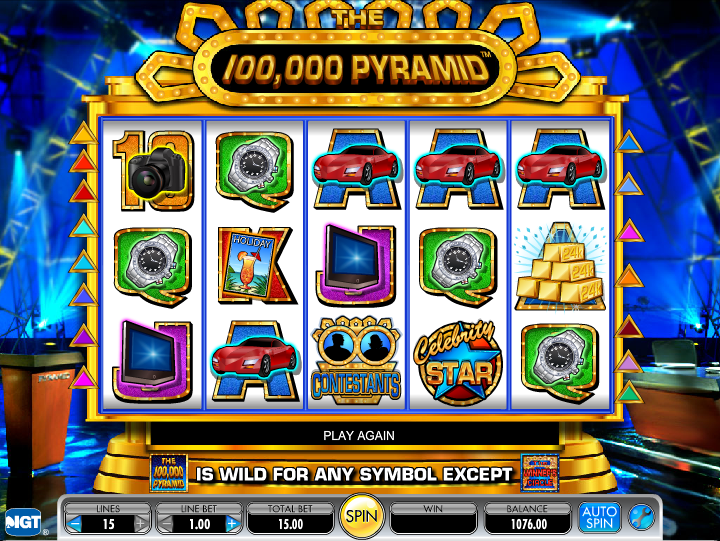 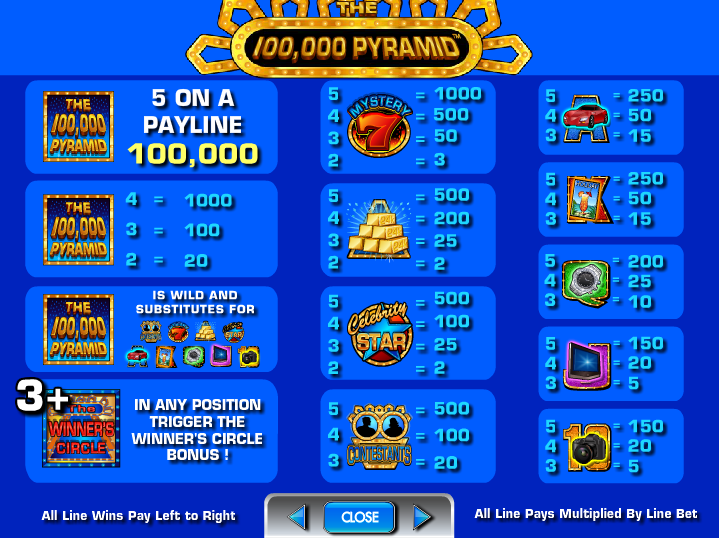 If you think you might recognise this online slot from IGT then you’ve probably played a game called The 50,000 Pyramid; this one’s called The 100,000 Pyramid and we’re here to find out if it’s twice as good as it’s predecessor. It’s based on a TV quiz show which may be due for a comeback in the summer of 2016 but until then this game may be enough to keep you busy.

The 100,000 Pyramid is a five reel slot with three rows and up to fifteen paylines; it’s all very glitzy and takes place against a backdrop of the television studio with plenty of spotlights and studio furniture.

The symbols are all related to the theme and include the Mystery 7, a pile of gold bars, the Celebrity Star, the two contestants, a posh car, a cocktail (representing a holiday), a nice watch, a television and a camera.

The game’s logo is wild and it substitutes for all other symbols except the scatter;it’s also the biggest payer and worth 100,000x your line stake for five on an active payline. The scatter symbol is represented by The Winner’s Circle logo.

This is triggered by landing three or more of The Winner’s Circle scatter symbols anywhere in view; as you can see from the video above the first thing you will do is play a pyramid picking game in which you select from the bottom row first, earning free spins, bonus picks and multipliers before advancing upwards. Eventually you will use up all your picks and take everything you’ve collected into the free spins round.

The free spins round will now start, using the spins and multipliers earned in the previous round.

The 100,000 Pyramid is really a slightly poshed up version of it’s predecessor but if you liked that then you’ll appreciate this newer version. The bonus feature is pretty much the same and it comes with an RTP of 92.78% – 95.03%.