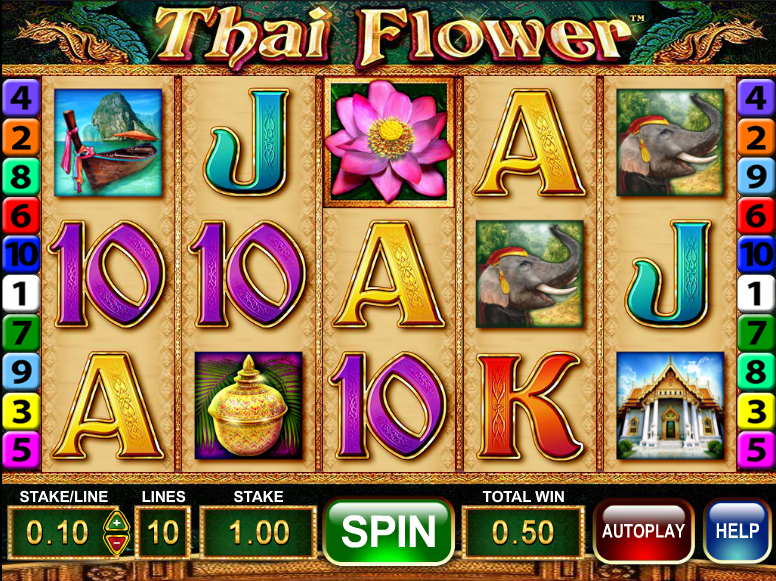 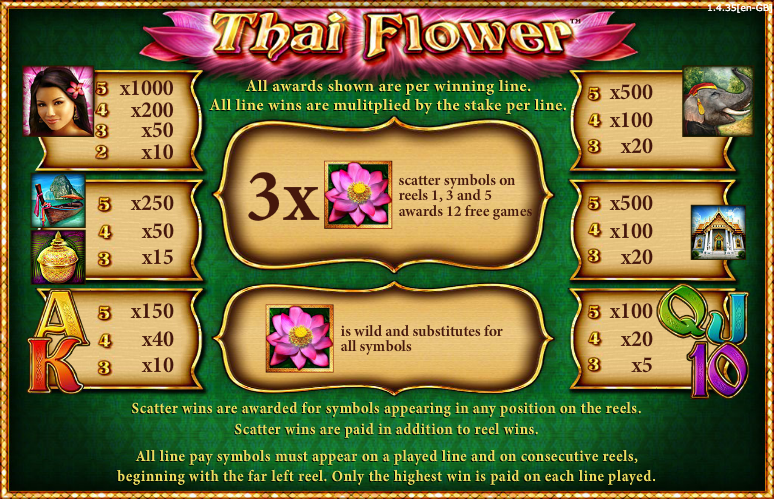 Our destination is now South East Asia and the cultural and tourist destination of Thailand; it’s the holiday choice of millions of tourists every year so if you’d like a reminder of the warm sun and the clear water then why not check out Thai Flower. It’s developed by Barcrest and it includes an oriental soundtrack and an interesting twist on a free spins round – read all about it below.

Thai Flower is a five reel slot with three rows and just ten fixed paylines; look closely and you’ll see those reels are framed with some ornate gold decoration. Just visible at the top are some more intricate carvings.

There are five theme-related symbol which comprise the Thai girl, a long-tailed boat, a golden pot, an elephant and an exterior view of a temple; 10, J, Q, K and  represented the lower values.

The pink lotus flower is the wild symbol and also the scatter symbol and it will substitute for all others to help out with winning combinations; of course it also activates the main feature.

This is the only extra feature and it’s triggered by landing three of the lotus flower scatter symbols anywhere on reels one, three and five. You will now receive 12 free spins but on a different set of reels.

To being with you need to press the ‘Start’ button and this will pick three symbols from the paytable (not including the scatter/wild). The reels will now feature only those three symbols, meaning that wins should be more frequent and larger.

There are now scatter symbols on this reel set meaning that re-triggering is not possible.

There’s nothing too spectacular about Thai Flower but it is a nice reminder of the country if you’ve previously visited; the sound effects are timed to each spin so they feel a bit interrupted and the feature is a little hard to trigger. However there’s something quite playable about it and it comes with an RTP of 95.00%.