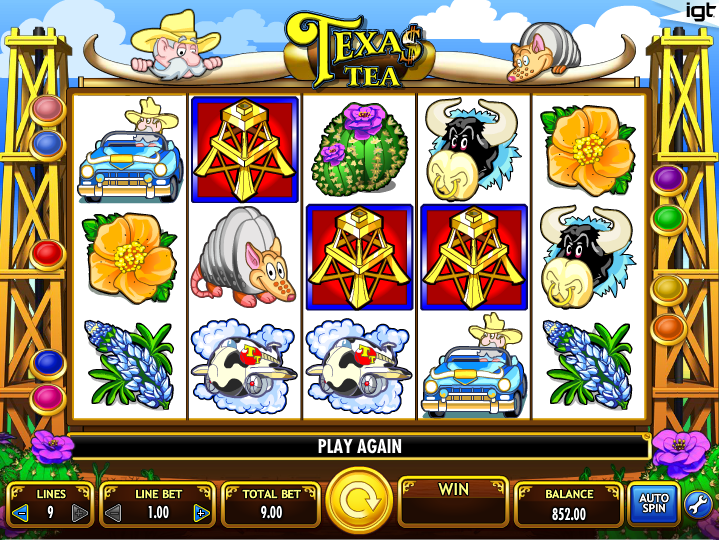 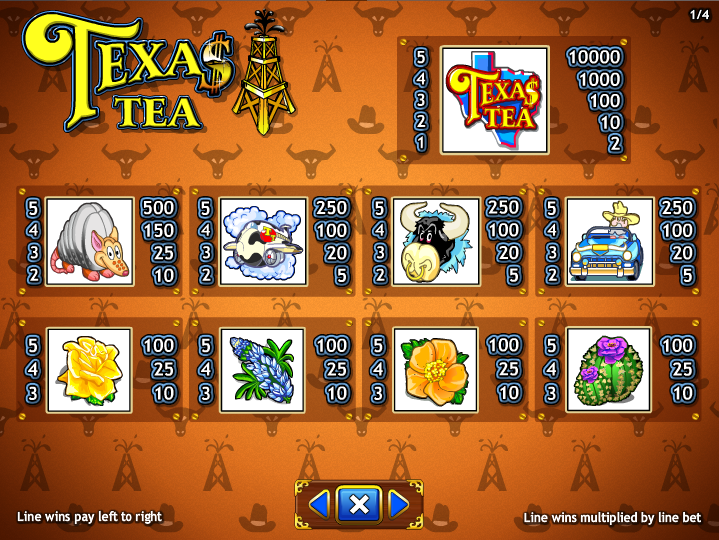 Some time ago we wrote a review for an online slot called Oil Mania and we thought it may well be the only drilling-themed game we were likely to encounter. How wrong we were – here we have a similarly-themed game release from IGT called Texas Tea and while it’s looks might be basic, it comes complete with two bonus features and a top prize of 10000 coins.

Texas Tea is a five reel slot with three rows and up to nine paylines; two drilling rigs stand either side of the reels while at the top are a huge pair of animal horns.

The symbols are all related to the theme and include the Texas Tea logo, an armadillo, an aeroplane, a bull, a Texan in a car and four flowers – a yellow rose (of Texas?), a blue one, an orange one and a cactus (excuse us for our lack of plant knowledge).

There is no wild symbol here but there’s a scatter (Texas Ted) and a bonus icon (an oil well) which activate the features.

This is triggered by landing three or more of the Texas Ted scatter symbols anywhere in view and really it’s just an enhanced scatter payout as follows:

You will get to see an animation of Texas Ted writing out a cheque for you.

Trigger this feature by landing three or more of the oil well symbols on an active payline starting from the left hand side. Now you get to place that number of oil wells in various Texas locations and you will receive a payout for each one:

This round can be speeded-up by using the ‘Turbo’ option available.

Texas Tea is a little basic to compete with many of the newer slots available but the theme is good fun and there’s a soundtrack which seems to have been lifted from a cowboy film (perhaps it has?). It’s worth a few of your pennies certainly and there’s an RTP range of 87.50% to 96.20%.