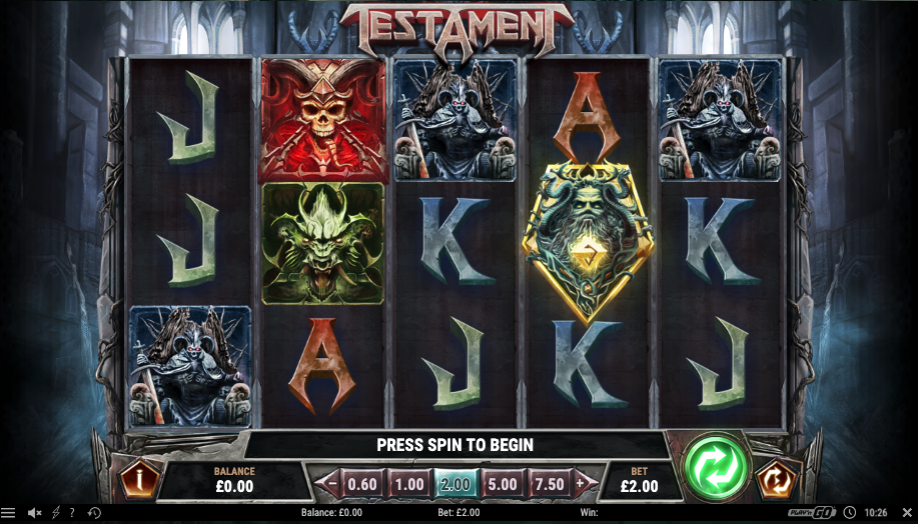 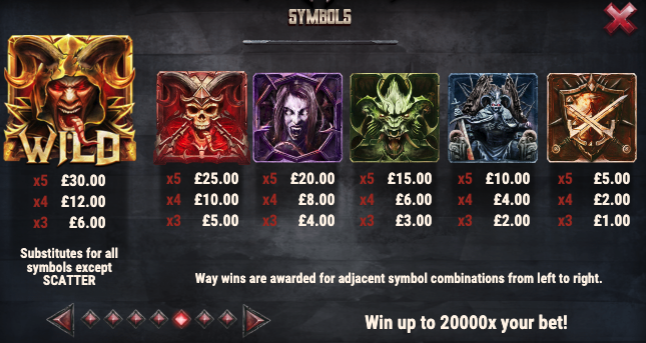 For those online slots fans unfamiliar with thrash metal music Testament are an American band formed back in the 1980s and their relative success since then has earned them their own game; it’s developed by Play N Go and it offers players features themed on three of the best-known songs.

Testament is a five reel slot with three rows and two hundred and forty three ways to win;  music from the band provides the soundtrack to the gameplay while those reels spin in some sort of gothic cathedral.

Five scary symbols related to the band represent the higher value symbols while J, Q, K and A make up the lower values. The red mask standard symbol can turn into a wild at random and when it does it will substitute for all others except the mask/snake scatter.

Landing two of the scatter symbols anywhere in view will award three free spins and you’ll receive one of the following enhancements depending on which song is playing at the time:

Trigger this by landing at least three scatter symbols anywhere in view for which you’ll receive nine free spins; the reels now display ‘blockers’ at the top of them and each scatter symbol landing will destroy a blocker on that reel. When all are cleared the reels become 4-5-6-5-4 with 2400 paylines and the Testament Spins are activated.

Testament Spins awards three extra spins to the total and all those remaining games are played with all of the Song Features active. During all types of free spins features the red mask will always turn wild.

The music of Testament might not be quite to all our tastes but the gameplay and quality of this slot from Play N Go is top notch; it’s like playing one big bonus feature in a creepy crypt and it’s highly recommended.