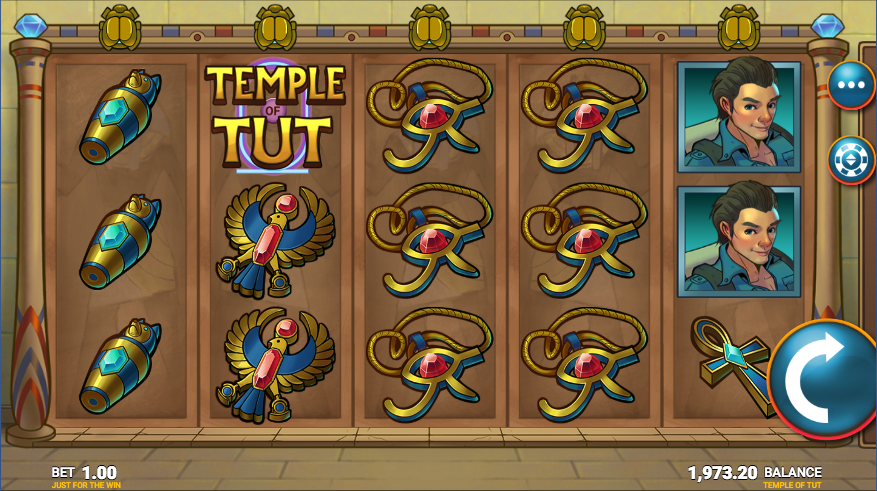 There was a time when pillaging the temples and sacred sites of foreign countries was looked upon as a branch of scientific endeavour and it’s an era on which Temple of Tut is themed; it’s an online slot set amongst the tombs of Egypt, it’s developed by Just For The Win and you can read all about it here.

Temple of Tut is a five reel slot with three rows and ten fixed paylines; the design is cartoon-style and those reels spin against the wall of this particular tomb with some gentle but appropriate background music to keep things ticking along.

The three higher value symbols are the heroes/grave robbers of this story while the four lower values are golden artifacts – an Eye of Ra, an Ankh, a scarab and a sarcophagus. Wins can be formed from right to left as well as left to right.

The Sphinx’ head is wild and it will substitute for all others to help form winning combos except for the Temple of Tut scatter symbol.

This can occur randomly during the main game, things will start to change colour and between one and five reels will be become Super Reels; this means that there is a greater chance of wild symbols appearing on those reels. The Super Reels occur very regularly but they won’t always result in wild symbols.

This is triggered by landing three, four or five Temple of Tut scatter symbols anywhere in view for which you will receive 8, 15 or 30 free spins respectively; throughout this round the Super Reels will be active on every spin which should help you out with some bigger wins

Temple of Tut is a colourful and enjoyable slot with plenty of Super Reels and a free spins round which should prove lucrative if you can trigger it – you may not become as rich as these particular treasure hunters but it’s fun to try. There’s an RTP of 96.01%.