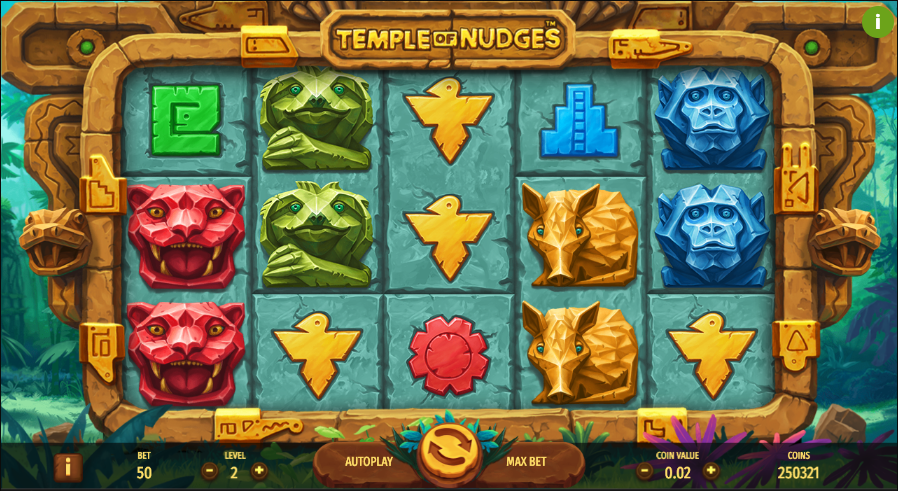 Dig out your mosquito spray and your machete because we’re heading deep into the jungle to check out this online slot machine from Net Entertainment; it’s called Temple of Nudges and it offer players automatic nudges and money-spinning respins.

Temple of Nudges is a five reel slot with three rows and two hundred and forty three ways to win; a lovely carved structure holds those reels against a backdrop of a steamy, humid jungle clearing.

The higher value symbols comprise representation of animals carved out of stone – a jaguar, an anteater, a snake and a monkey; four shapes in similar colours make up the lower values. All symbols can appear stacked on all reels.

There’s no wild symbol in Temple of Nudges but there is a ‘Respin’ icon which we shall explain in good time.

This is where the fun starts and it’s the only real feature in this slot, built into the gameplay. Every time you land a winning combination the nudge feature is activated and the reels will drop down one position, hopefully resulting in another win and a continuation of the feature.

The extra part to this bonus is the Respin symbol which may appear during the nudge feature – if you’re lucky enough to see it drop onto the reels all symbols matching the winning combo will lock in place while all the others spin. It effectively gives you a free spin during this round to extend the feature and guarantee at least one more win.

Net Ent are always capable of creating something a little different and Temple of Nudges is a slot which does just that – the Nudge Feature is certainly something we’ve not seen previously and it means that this game is one to recommend.