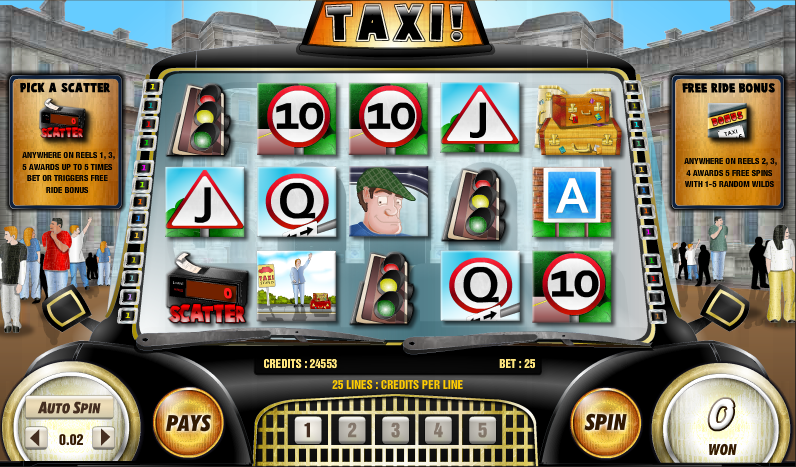 NextGen Gaming are one of the online slots developers with a solid reputation for producing creative games and in this review we’re going to take a look at Taxi!, a game obviously based on that most traditional of vocations. It’s perhaps a slightly odd premise but one which seems to work in this case.

Taxi! plays out over five reels and twenty five fixed paylines and the design of this slot is quite basic but attractive nonetheless. The reels are placed within the windscreen of the taxi in the foreground and in the background is a generic tourist attraction of some sort. The headlights and sidelights on the taxi are the buttons necessary to play the game.

The lower value symbols are road signs featuring 10, J, Q, K and A and the higher values are the driver’s ID, some luggage, traffic lights, a potential customer and the flat-capped driver himself.

The wild symbol is the interior of the taxi which animates when it contributes to a winning combo, the taxi meter is the scatter and there’s a bonus symbol which activates the main feature.

The taxi meter scatter symbol appears only on reels one, three and five and if you can land it on those reels just pick one of them for a reward of up to 5x your total stake. It’s also occasionally possible to pick entry into the Free Ride Bonus as described below.

This feature is triggered by landing the bonus symbol on reels two, three and four or by arriving here from the scatter bonus.

You will receive five free spins and before each spin the windscreen wipers will clean the reels, adding between one and five wilds to random positions. If you’re lucky and land lots of wilds this can be a lucrative feature.

On any winning spin you may be awarded a multiplier of up to 5x, which is not to be sniffed at.

We like this slot a lot – it looks funky and original and the bonus features tie in well to the game’s theme, right down to the windscreen wipers which hand out the wilds in the Free Ride bonus. Definitely worth checking out.