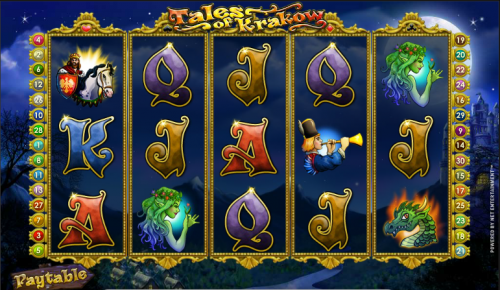 The ancient capital of Poland is the setting for this online slot from Net Entertainment; it’s no longer the capital city of course, that honour goes to Warsaw but Tales of Krakow game is set in an era when knights on horseback roamed the land and dragons were a fiery danger from above.

There’s nothing wrong with a little bit of fantasy in a slot machine and this five reel and thirty payline game offers just that; the reels are set in an ornate gold frame behind which we can see a full moon watching over sparse trees and the turrets of a castle on a hillside.

The lower value symbols are represented by some medieval looking 10, J, Q, K and A but further up the scale we have a green-haired elf, a mouse with a pair of boots and a trumpeter.

Special symbols include a fairly friendly-looking dragon which activates the bonus game, a devil’s head wild and a knight on horseback scatter.

Twelve free spins are available for those lucky enough to land three, four or five of the knight on horseback scatter symbols; the spins are awarded on top of the healthy prize you get from forming this combo.

During the free spins round every prize you receive will be subject to a 3x multiplier.

This is a fun little bonus game and you can trigger it by landing three, four of five of the dragon bonus symbols on an active payline.

You’ll then be whisked to the dragon’s cavern, a place piled high with gold and jewels and in the centre of the screen you’ll see rows of huge eggs.  To the right of the eggs the is the dragon, he’s not so friendly-looking now and his eye follows your mouse pointer as you move it around the cave.

Your task is to pick an egg from the bottom row, the middle row and the top row; there’s a cash prize available on each row but if you select the empty egg you’ll be rewarded with some vile-looking green smoke and the end of the game.

There’s some appropriately dramatic music to accompany this game and it’s thoroughly enjoyable to play; the two bonus features add some creativity to the mix