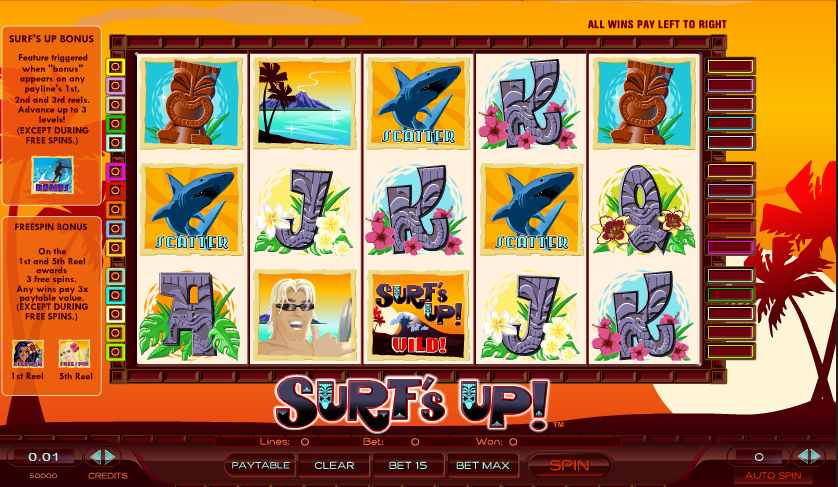 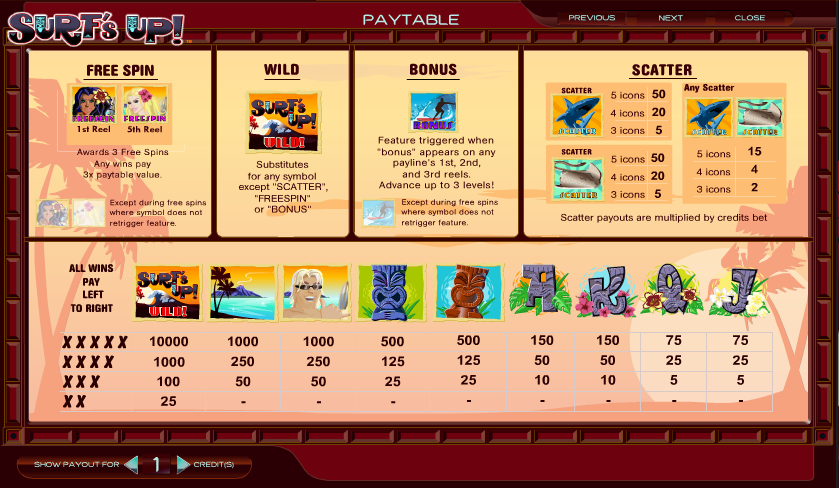 It’s time to grab your board and head out into the surf as we check out this gnarly online slot called Surf’s Up. These days it’s an Amaya Gaming product but it was originally designed by Chartwell before the takeover in 2011. Surfing seems like an ideal theme for a slot but we can’t recall many others of this genre so read on to find out what we think of this one.

Surf’s Up is a five reel and fifteen payline game and those reels are set against the background of an enormous setting sun; a rolling wave travels along below the reels before crashing on the plan-fringed shore.

The main symbols are two Tiki masks (brown and blue), an archetypal surfer dude and a view of the ocean. Lower values are rocks carved into the usual J, Q, K and A.

The shark and the manta ray are scatter symbols, the bonus symbols are two female ‘free spin’ symbols and a surfer bonus icon; the wild is a breaking wave.

This may be the shortest free spins bonus ever – trigger it by landing the dark-haired girl on the first reel and the blonde girl on the fifth. You will now receive three free spins with a 3x multiplier for any wins.

This feature cannot be re-triggered.

This is bit more substantial and it’s triggered by landing three of the surfer bonus symbols on the first three reels of an active payline.

You will be shown three surfers bobbing about on the ocean waves so pick one and he or she will embark on a run which will be judged as follows:

There are three levels in total and the prizes are progressively higher in each level.

The bonus is only triggered on an active payline so play with as many paylines as possible to increase your chances of achieving that.

This is graphically a pretty basic game but it’s quite cheerful and it seems pretty easy to trigger both bonus features. The soundtrack is actually bearable for a game of this age.