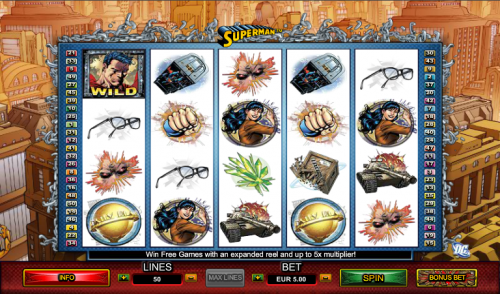 He’s the Man Of Steel! He can leap tall buildings in a single bound! He is of course Superman, the legendary DC Comics character hailing from the planet Krypton.  This online slot is from Cryptologic, probably better known for their range of Marvel slots but here they’ve turned their hands to a different superhero universe.

Superman is a five reel and fifty payline slot with a number of different bonus features which is something we always like; the standard reels are bursting out of chains and set against a cityscape.  With the Bonus Bet activated the reels are encased in rock and the background is a massive explosion.

There are a range of Superman-related symbols including Clark Kent’s glasses, kryptonite, a fist, a tank, Superman’s capsule, the Daily Planet logo, Lois Lane and Lex Luthor.  Special symbols are the Superman logo which is the scatter and Superman himself which is the wild symbol.

To win the free spins prize you’ll need to land Superman on reels two, three and four and for that you’ll get 10 free spins.  The big feature here is that an expanding wild will appear on one random reel per spin and if it completes a winning combo it will be subject to a 5x multiplier.

To have a chance of triggering the Save The World Feature you need to activate the Bonus Bet; pressing the ‘Bonus Bet’ button will ensure the maximum fifty lines are played plus an extra ten coins.

Save The World Feature

Once that Bonus Bet is activated you will trigger this feature by landing three Superman bonus symbols anywhere on the reels; now the fun starts and Superman will fly through space, destroying meteors and missiles to earn cash prizes.

The Man Of Steel will then fly across an arctic landscape to three safes – one contains kryptonite which ends the game, one contains hostages who will reward you with a prize and one contains the baddie Lex Luthor, capture him and win up to 100x the triggering bet.