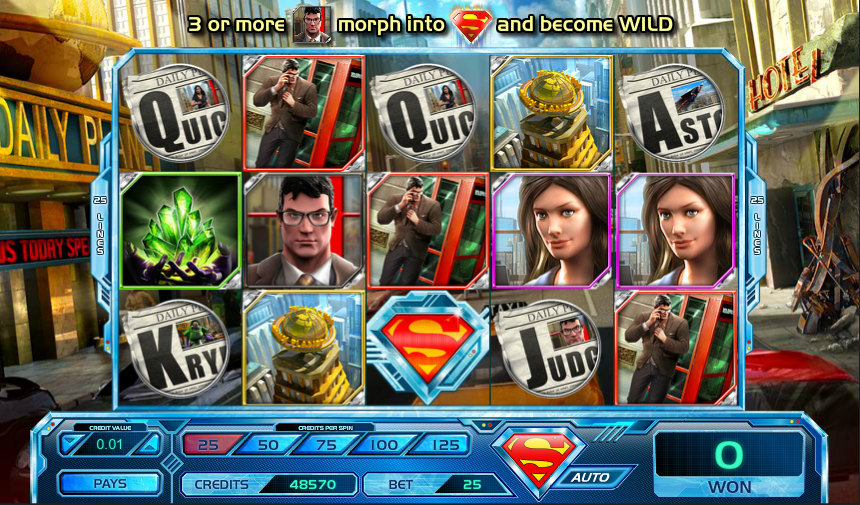 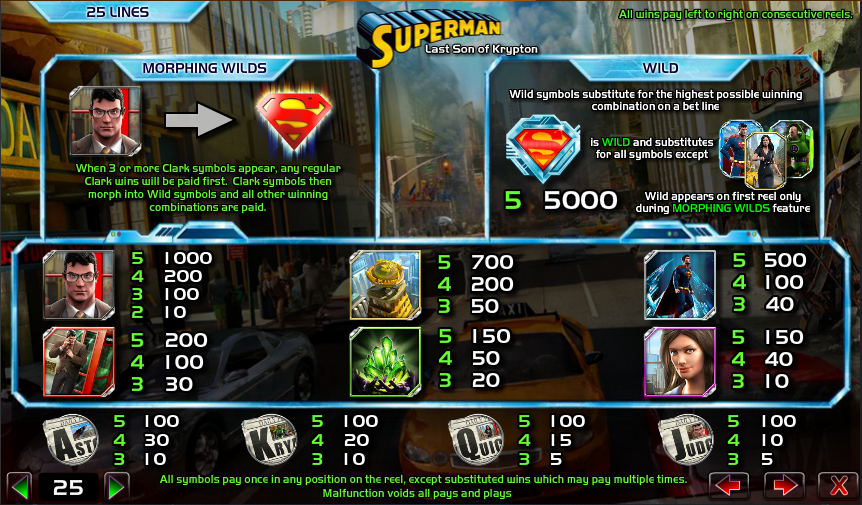 If you’ve previously played Cryptologic’s Superman then you will be pleased to hear that we bring news of the sequel; this one’s called Superman: Last Son Of Krypton and it improves on it’s predecessor in terms of graphical quality while retaining the entertaining gameplay which made the original an enjoyable affair.

Superman plays out over five reels and twenty five fixed paylines and a wrecked cityscape is the backdrop to the action on the reels. Superman is heavily involved in all the action but Lois Lane and Lex Luther also play a part.

Special symbols include the Superman logo wild and the three main characters. The Clark Kent close-up also has a special function explained below.

This is where Clark kent comes in handy and if three or more of his close-ups appear anywhere on the reels they will morph into wild symbols. This will happen after any other wins have been paid.

This feature is triggered when you land Superman on reel one and Lois Lane on reel five. You will now be shown five pictures of Lois (as you can see from the video above) and your random choice will determine how many free spins (10, 15 or 20), wilds (4-8) and the multiplier (2x, 3x or 4x) level you receive.

When the free spins start that number of wilds will join reels two to five, giving you extra chances to land wins. You can re-trigger this game and the Lex Luthor Frozen Wild feature from within this round.

Here you must land Superman on reel one and Lex Luthor on reel five; you will now get to choose one of five Clark Kents to give you a random award of free spins (3, 4, 5, 7 or 10) and multipliers (1x-5x).

When the spins start you will see Superman on the left and Lex Luthor on the right; on each spin Superman will freeze three of reels two, three, four or five. On the next spin Luthor will destroy those wilds. You can re-trigger this game and the Lois Lane Wild Hearts feature from within this round.

There’s very little interactivity here so we don’t have much to offer in the way of advice but we would recommend keeping the sound on for some tasty superhero sound effects while you play.

Good stuff, this; there are lots of bonus features and they seem quite easy to trigger. The graphics are decent quality and there are plenty of in-game animations to keep players entertained. Cryptologic now operate under the Amaya Gaming banner.