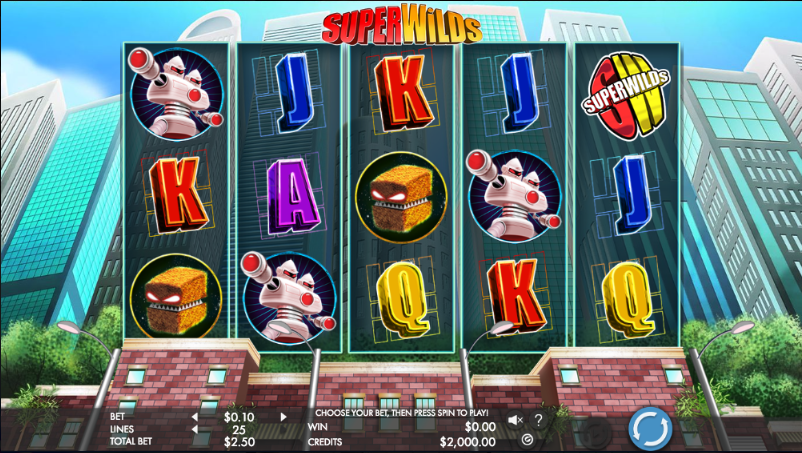 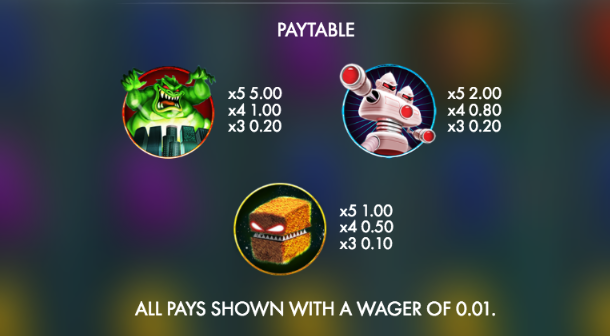 When the hostile aliens eventually land we will certainly need someone to protect the citizens of this planet against their nefarious acts and who better to help us out than the Super Wilds, a group of talented but odd-looking characters devised by Genesis Gaming to see off those pesky invaders – read all about it below.

Super Wilds is a five reel slot with five rows and up to twenty five paylines; those reels spin against the backdrop of an undamaged city, so far free of alien damage and destruction.

There are just three high value symbols and these are the alien characters – a green blob, a white robot and a brown boxy thing with sharp teeth; J, Q, K and A are the lower values.

There are  five wild symbols, a standard one which is the Super Wilds logo (appears only on reels three, four and five) and four character wilds which each have a bonus feature attached and are described in more detail below. All act as standard wilds in the base game.

This is triggered by landing three or more of any wild symbol in view and you will initially be be awarded ten free spins. Any Super Wild character which triggered the feature will now be enhanced in the following ways during this round:

This round can’t be retriggered from within the feature.

Super Wilds uses it’s wild characters in an interesting way, at least when the free spins feature is triggered; it’s a lot of fun, highly recommended and comes with an RTP of 95.12%.