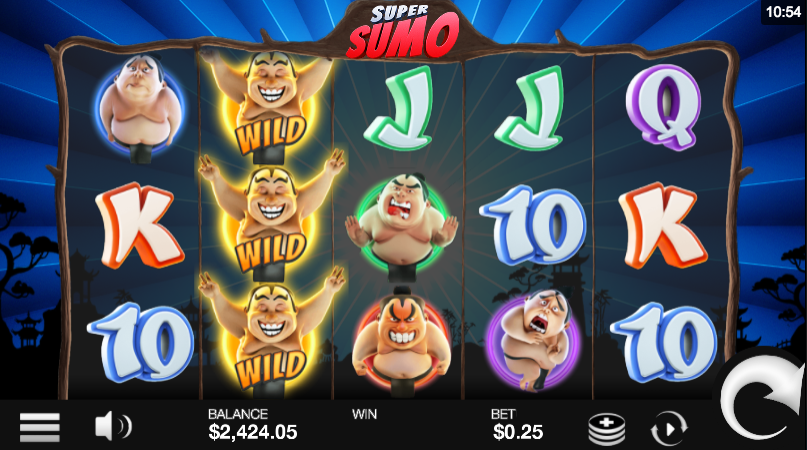 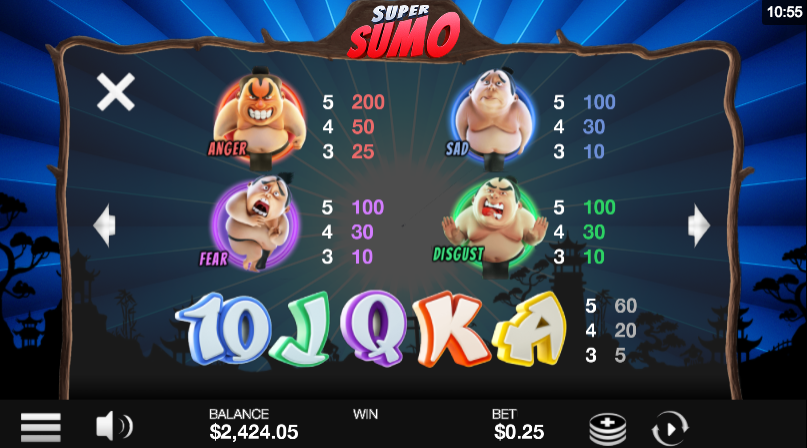 The Far East may be mysterious and inscrutable but it’s also home to one of the more bizarre sports – Sumo wrestling; Super Sumo is an online slot machine based on this activity and it’s cartoonish, cheerful and action packed – read all about it below.

Super Sumo is a five reel slot with three rows and twenty five fixed paylines; the reels are darkly transparent, contained within a length of branch and they sit against a backdrop of a stylised sunrise behind silhouetted trees.

The four higher value symbols are all Sumo wrestlers and are differentiated by colour – red, blue, purple and green; 10, J, Q, K and A represent the lower values.

The wild symbol is a celebrating yellow wrestler and he’ll substitute for all others to help form winning combinations except for the Super Sumo bonus icon which appears only on reels one, three and five.

Each time you land two or more wilds on the reels you’ll receive a free respin with those wild symbols remaining in place; the good news is that you’ll continue to receive extra spins as long as new wild symbols land on the reels. When no more appear the round is over but hopefully you’ve had a couple of big wins by then.

This is triggered by landing three of the Super Sumo bonus symbols anywhere on reels one, three and five and for this you will be awarded ten free spins. Throughout this round a gyrating Sumo wrestler will occupy all of reel two and act as a wild symbol to help you out.

In graphical terms Super Sumo offers something a little different from the usual fare and that design is complemented by two separate bonus features and some amusing, cheerful graphics. Try it out – it comes with an RTP of 95.18%.