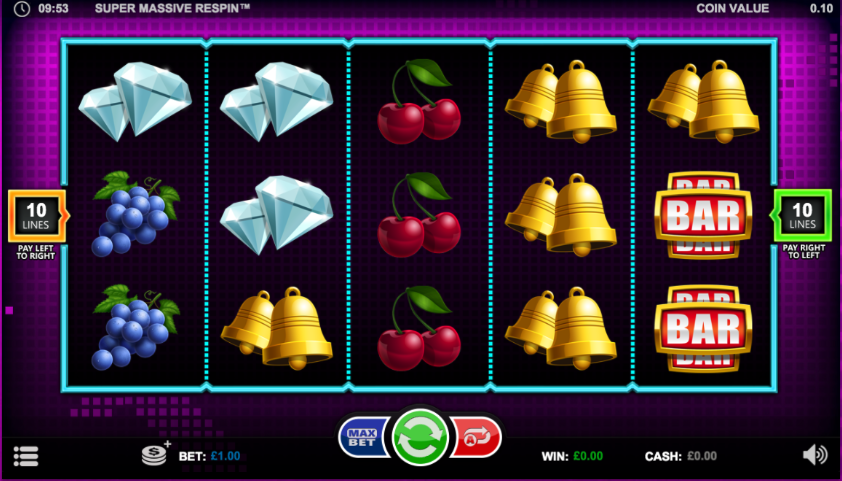 If you’d like to check out an online slot which combines some traditional elements and symbols with a clever bonus feature then Super Massive Respin may be of interest; it’s a game developed by Betsson with some sleek looks and you find out how it all works right here.

Super Massive Respin is a five reel slot with three rows and ten fixed paylines; slim blue borders form the frame to those reels while a pixellated purple backdrop shimmers behind the action. There’s also a jaunty soundtrack to accompany the reel-spinning action.

There are just seven symbols, all related to the the theme and these comprise golden stars, gold-rimmed bars, bells, cherries, red sevens, diamonds and a bunch of grapes.

The jester is wild and she will replace all others to help form winning combinations. In this game winning combos can be formed from right to left as well as left to right.

This is the only extra feature but it’s a good one – on any non-winning spin a gigantic symbol may be chosen at random will fill all positions on reels two, three and four. You’ll now receive a free respin of reels one and five to give you a good chance of a four or five of a kid win. The paylines which pay both ways also make it more likely you’ll land a decent win here. Lucky players will see the bonus triggered a second time.

Super Massive Respin is a very playable slot which eschews too many bells and whistles and provides us with a smooth gaming experience plus a clever and potentially lucrative bonus feature. It comes with an RTP of 96.74%.