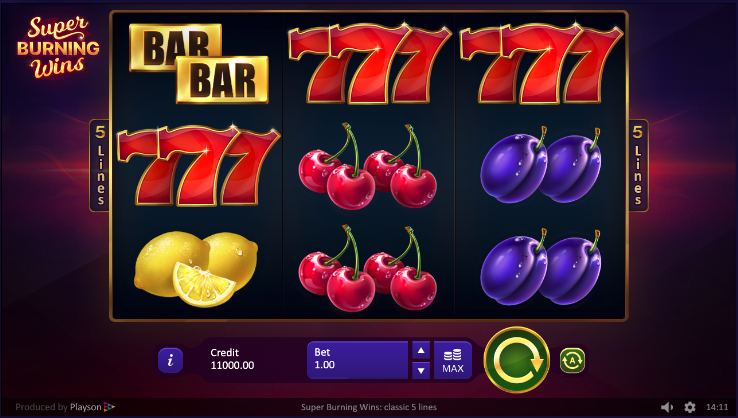 Simplicity is of course a virtue and there was apparently a simpler time when you could leave your back door open, kids could play in the street unmolested and three reel slots were the only entertainment for those looking for a quick wager; only the last of those is true however but the good news is that there are still online slots such as Super Burning Wins to keep us busy – it’s developed by Playson and will not encumber players unnecessarily with bonus features.

Super Burning Wins ia an three reel slot with three rows and just the five fixed paylines; a slender gold frame surrounds those reels which float against a hazy, dark red backdrop. The clicking sounds and magical blasts of a physical slot accompany your gameplay.

The symbols are all traditional and familiar and they include red sevens, golden bells, gold bars, plums, lemons, oranges, cherries and large Xs. There are no wild or other special symbol in this game.

We may have said there are no bonus features but there’s a mini-one in the shape of the Second Chance Respin in which a reel spin that results in two reels filled with matching symbols will respin the third reel in the hope of landing a win.

In the event that a regular win or a Second Chance Respin results in nine matching fruit symbols filling up all positions, a 2x win multiplier is applied to the prize.

Super Burning Wins may be on the simple side but it’s a masterclass of high quality design with some stunning, glistening symbols and some of the smoothest gameplay you’ll find anywhere; forget the lack of extra features – this is good stuff!