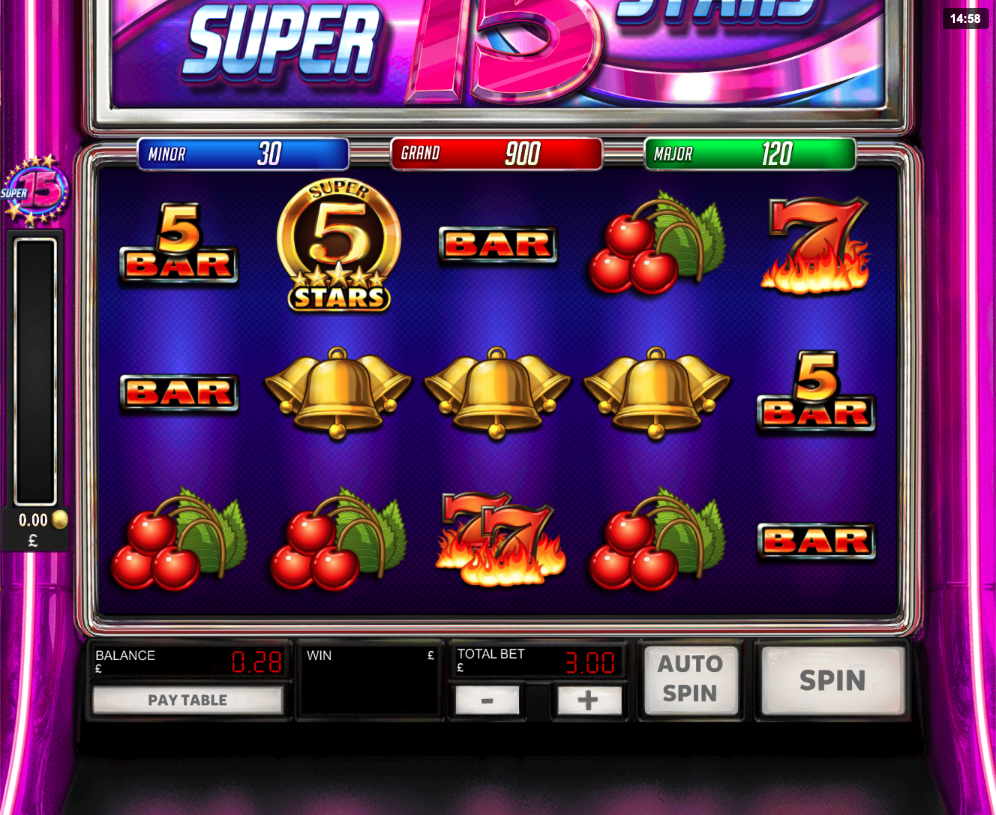 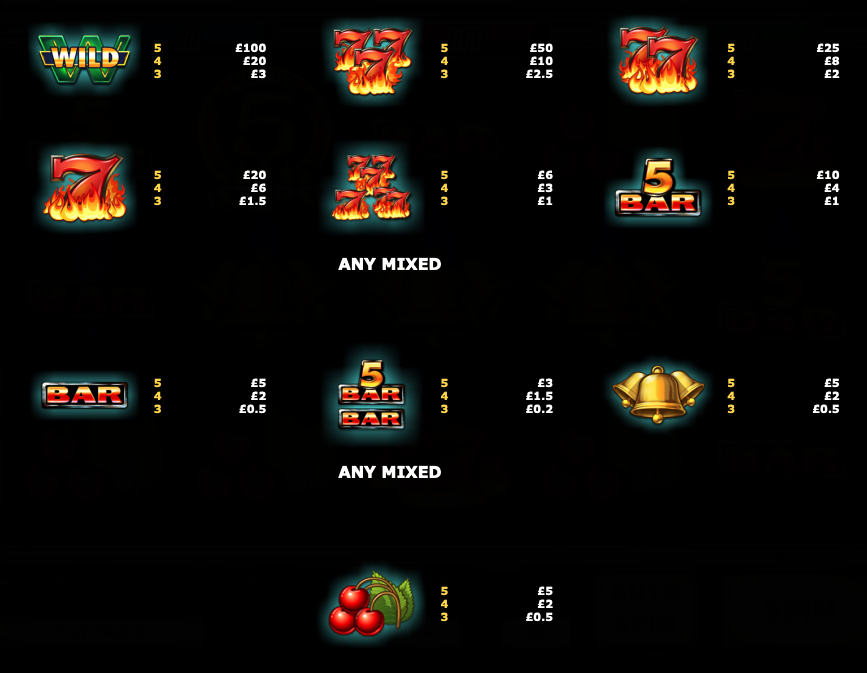 If you’ve previously played online slots such as Super 5 Stars and Super 7 Stars from Red Rake Gaming then you’ll be pleased to hear there’s now a Super 15 Stars to add to the collection – the gameplay and looks are familiar but there are some extra features to add to the fruity mix.

Super 15 Stars is a five reel slot with three rows and thirty fixed paylines; the setting is a casino in which our machine is surrounded by lots of similar machines, just waiting to turn enthusiastic players into wealthy ones.

The higher value symbols comprise sets of red sevens (one, two, three and five), the Bar, 5 Bar and double 5 Bar, the golden bells and the cherries. The Bars and red sevens will also pay out as a mixed combo.

The ‘Wild’ is appropriately wild and it will replace everything except for the Spin, Super 5 Stars, Super Silver Stars and Bonus to help form winning combinations.

The meter on the left hand side is slowly filled up by achieving non-winning spins and when it’s full the Stars Fusion Minigame is activated: you’ll receive three spins on a set of reels which only contains the Super 15 Stars symbol and blanks – each symbol will lock in place and reset the number of spins to three again. As more of these symbols land next to each other they will join together, creating new shapes (some shown below) and awarding bigger prizes. The round is over after three non-winning spins or all positions are full, creating one giant symbol worth 10000x the stake.

Landing the stacked Super 12 Stars symbol completely in view on reel three will trigger this feature and that symbol will now transform into three stars displaying various prize values; they’ll lock in place and you’ll receive three respins with each new star resetting the spins to three again. The round is over when all positions are full of stars or there are three non-winning spins – you’ll now receive the total of all the values on those stars.

If you can land the stacked Super 7 Stars symbol completely in view on reel three it will turn wild, lock in place and award one respin.

This is triggered by landing three of the Bonus symbols on or one place away from the payline on reels two, three and four; you’ll now get to find three matching numbers of spins from the grid on offer with the following possibilities:

There’s a wild card that can be picked during this process and this will award an extra five spins to your total; all wins will be multiplied by 2x.

Trigger this by landing at least three Spin symbols anywhere in view and you’ll get to spin the roulette wheel which will award a multiplier of your stake.

Landing the Super 10 Stars stacked symbol fully in view will turn that symbol into a wheel which will spin and award a Frenzy spin of the roulette wheel, multiplier wins or some free spins. The Frenzy spin will ask you to choose pick or blue and if your selection is correct you’ll earn your multiplier and get to spin again.

Super 15 Stars is a slot which offers, as they say, multitudes – there’s so much going on here and you can be sure that a lot of it will actually happen without having to wait too long. What will take a while is filling up the meter on the left hand side but it’s worth it when you finally do.