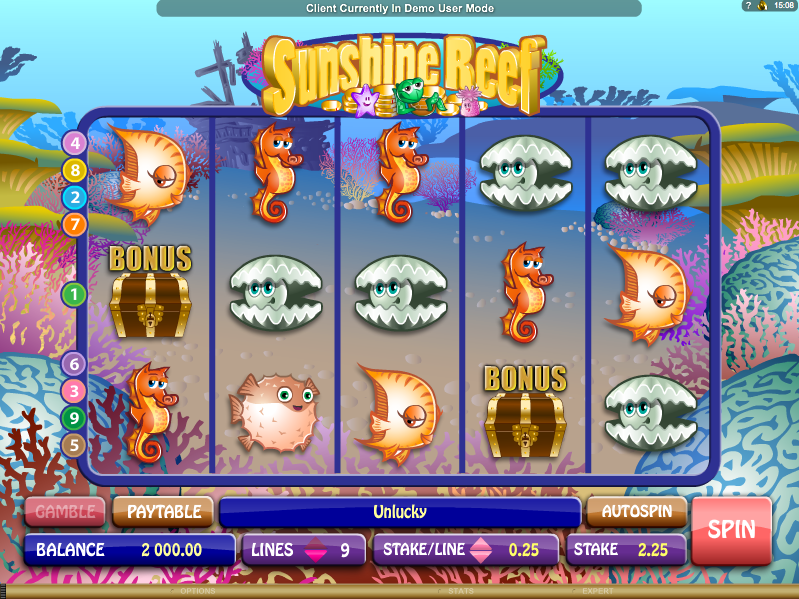 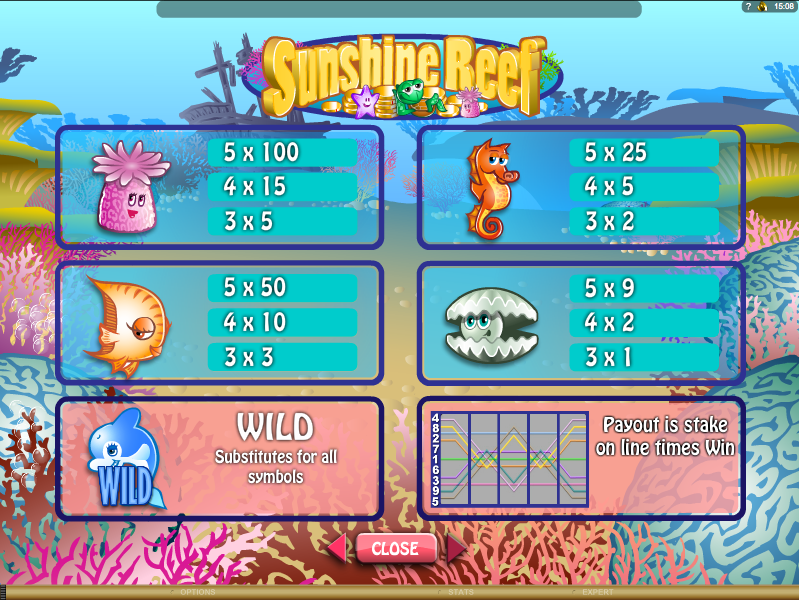 Deep beneath the ocean waves live a vast array of colourful creatures and if you believe the impressions given by numerous online slot machines then those living the life aquatic are all extremely cute and cheerful. They may well be for all we know and they certainly are in Sunshine Reed, a cartoonish release from Microgaming.

Sunshine Reef is a five reel slot with three rows and up to nine paylines and those blue transparent reels are set against the backdrop of an underwater scene featuring clear blue water, multicoloured sea plants and the decaying wreck of a ship.

The symbols are all nautical and include plenty of cute creatures such as oysters, seahorses, anemone, octopi, puffer fish, turtles and starfish.

A pretty blue dolphin represents the wild symbol and substitutes for all others; the bonus symbol is a locked treasure chest and you will need these to activate the feature.

On most slots you can only create winning combinations of symbols starting from the left hand side (reel one). Here the combos can start from reels one, two or three which gives some extra scope for winning opportunities.

You will need to land three or more of the treasure chest bonus symbols on an active payline to kick off this mini-game. Because the wild symbol substitutes for all others it can also stand in for a bonus symbol. You will be now be taken to a screen displaying three treasure chests and all you have to do is pick one to reveal a prize based on your stake. The maximum seems to be 250x your line stake.

If you are lucky you will be offered the chance to take another pick; if you’re really lucky you may even get a third stab at a chest.

This is a very simple gamble feature and you will get the chance to double your win by choosing which one of the two oysters contains the pearl. Get it wrong and you’ll lose your winnings.

This is an odd little game with not much in the way of creativity but it does look very attractive and it’s also strangely addictive. To us it doesn’t look like a standard Microgaming slot but it’e well worth a go.