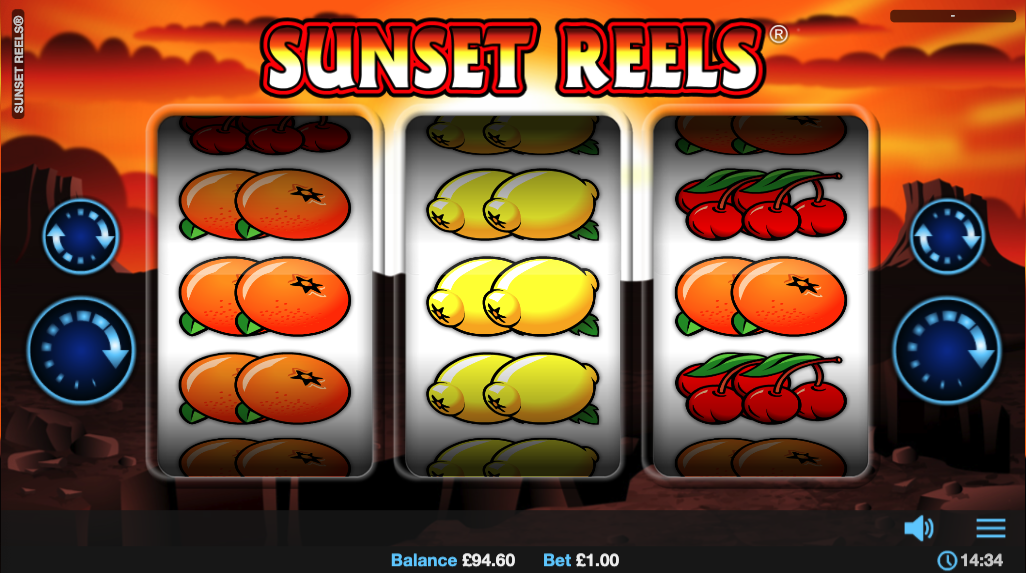 If you’ve previously enjoyed playing the Sunrise Reels online slot machine from Realistic Games then you’ll be pleased to hear that there’s a similar game called Sunset Reels; it will be particularly good news if you’re a stickler for the time of day and have been looking for something to try at the end of the day rather than at the beginning.

Sunset Reels is a three reel slot with three rows and just five fixed paylines; behind those neat reels there is in fact a setting sun illuminating the rock stacks of some desert state.

There are plenty of traditional symbols in use here and they include double red sevens, watermelons oranges, plums, bars, cherries and lemons the sevens are the most valuable and worth 160x your stake for three on one of the paylines. There are no wild or special symbols in Sunset Reels.

There’s not really much more to say about this slot except that as a sort of mini-feature the Full House Bonus will be awarded if the reels land with matching symbols in all positions – his will double any prize you’ve won.

So that’s it – just set the Autoplay, sit back and watch the simple reels spin for some old-fashioned one-armed bandit action. You can play up to 100 spins automatically at a stake of between £0.05 and £50.00.

Just like Sunrise Reels you get pretty much what it says on the tin – this is for those of us who prefer some basic slots action without the intrusion of multiple bonus features and more than three reels. If this sounds like you then give it a whirl!