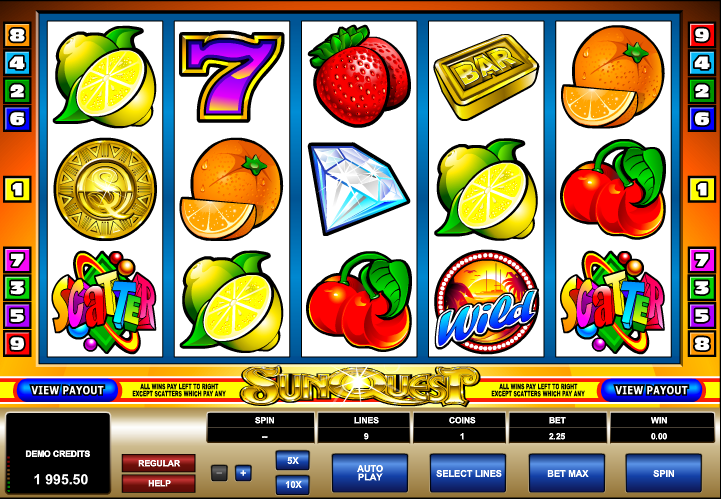 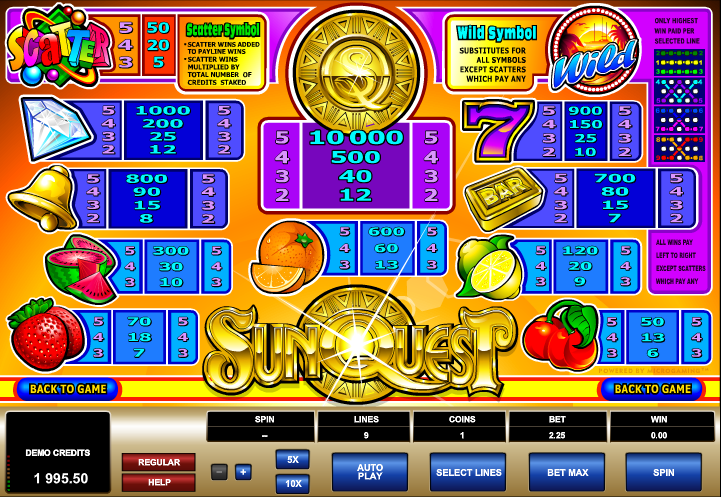 If you’re looking for a throwback to a time when flashy graphics and bonus features were unnecessary then an online slot such as Sunquest might fulfil those criteria. It’s a Microgaming release with some basic looks and sound effects which doesn’t overburden us with complicated extra games and options – just click the ‘Spin’ button and watch the reels spin.

Sunquest is a five reel slot with three rows and up to nine paylines; it’s title suggests some sort of sun-related theme but in reality there’s only a passing nod to anything like that. The traditional symbols take up all available screen space leaving no room for a pretty background of any sort.

The wild symbol is the main reference to the game’s name and it’s a nice sunset view featuring yachts and palm trees; it only appears on reels two, three and four and will substitute for all other symbols except the scatter. That scatter symbol is a colourful mix-up which does not have to appear on a payline to be effective; at least three anywhere in view will payout.

As we’ve already stated there are no bonus features to trigger in Sunquest so the gameplay is all about spinning the reels. The ability to create winning combos with just two high value symbols suggests that this is a low/medium variance slot with plenty of small wins. The biggest payout however is a healthy 10000x your line stake for five golden coins on an active payline.

Frankly this slot will appeal to those who prefer something basic without any bells or whistles. That’s not a bad thing and it comes complete with a decent RTP of 96.95%.