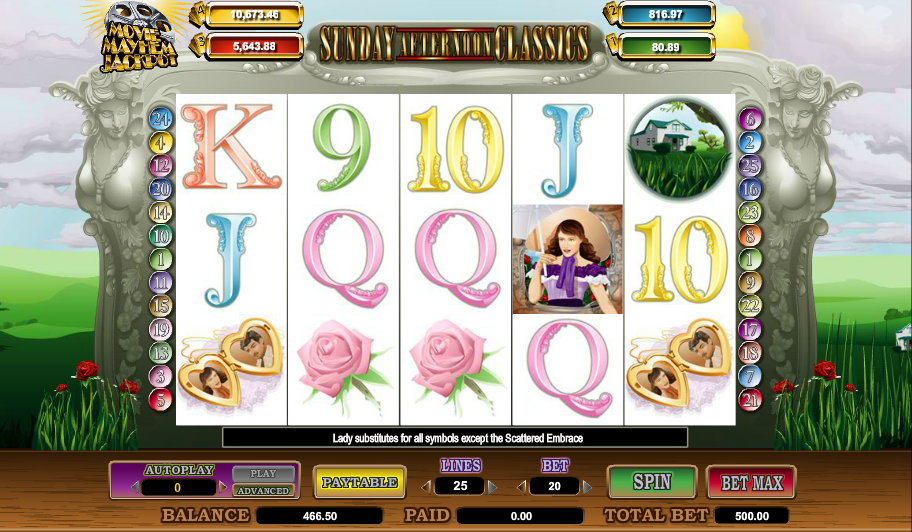 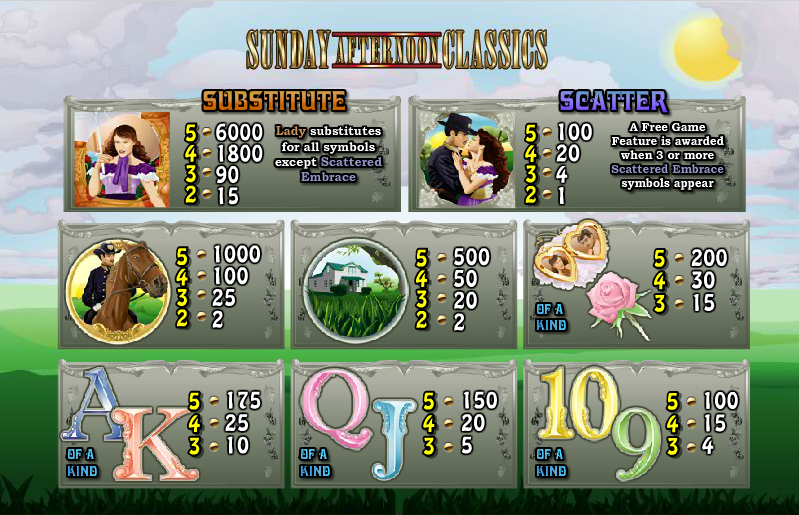 You know the feeling, it’s Sunday afternoon and still too early to go to the pub for a last drink before Monday comes around again so what do you do? Find some old film on the telly and sit through it to wile away a couple of hours. That’s what this online slot from NextGen Gaming is all about (although there’s no mention of the pub) – it’s called Sunday Afternoon Classics and as well as a free spins round it comes with NextGen’s Movie Mayhem progressive jackpot.

Sunday Afternoon Classics is a five reel slot with three rows and up to twenty five paylines; those reels spin on what looks like an ornate tomb framed by stone angels; in the background flocks of birds fly low across a green meadow under a cloudy sky.

The four high value icons symbolise various film genres – a sheriff on a horse, a house in a meadow, a heart-shaped locket and a pink rose. 9, 10, J, Q, K and A represent the lower values.

The wild symbol is a girl brandishing an umbrella and she will substitute for all others except the scatter – that’s represented by a canoodling couple and it activates the main feature.

This is triggered by landing three or more of the ‘canoodling couple’ scatter symbols anywhere in view (their proper name is Scattered Embrace). You will now be awarded ten free spins and not only are all wins tripled but the spins can also be re-triggered by landing more canoodlers during this round.

You already know that there are four different jackpot amounts above the reels and these are the amounts you could win. There’s a mini-game to play and it’s triggered randomly from the base game although you can increase your chances of this with larger stakes.

The mini-game involves picking from movie-themed items to find tickets – the number found determines which jackpot prize, if any, you will win.

Sunday Afternoon Classics is a certainly an odd theme for an online slot but it’s inoffensive and performs it’s reel-spinning duties without complaint. At least it’s probably better than watching a boring movie on a Sunday and it has an RTP of 93.87%.