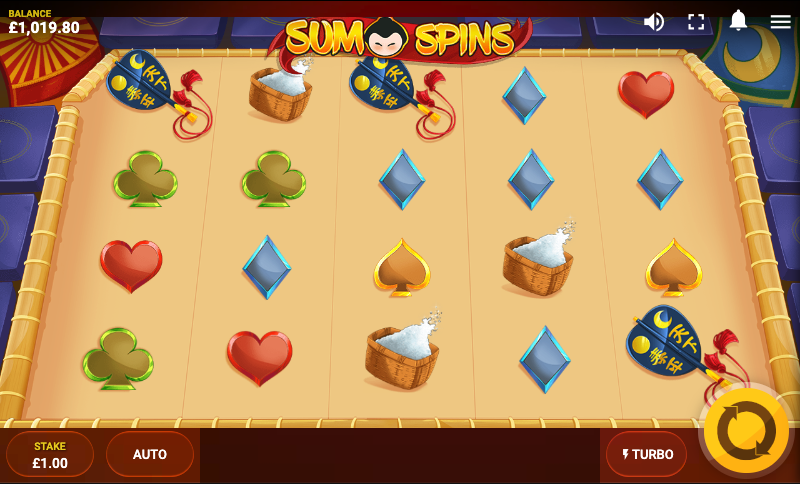 Whether Sumo wrestling is actually a sport or not is probably something of a judgement call but who cares when it’s theme of an online slot machine? This is a good one as well – it’s called Sumo Spins, it’s developed by Red Tiger Gaming and our three Sumo stars are doing their best to win us some money.

Sumo Spins is a five reel slot with four rows and forty fixed paylines; we’re looking down on the Sumo square from above at the spinning reels with cushions for the spectators placed around the outside.

The high value symbols are all connected to the sport and include a pile of money, a huge bowl of food, a bucket of water, a banner and a bowl of powder; playing card symbols in yellow, red, blue and green represent the lower values.

The three bonus symbols are the wrestlers themselves – Red Rikishi, Blue Rikishi and Green Rikishi – and we’ll explain what they do below.

Each time one of the three wrestlers lands on the reels they will trigger the following features:

If at least two wrestlers land on the reels on the same spin the Sumo Showdown begins and this is a battle between played out as the reels spin. If three wrestlers trigger this round then it’s red and blue vs green. You’ll be prompted to pick one of the wrestlers to act as wild symbol during this round.

Sumo Spins takes what could be an average slot, throws in the three wrestlers and turns it into a really enjoyable reel spinner; it’s all good fun in a cartoonish way and definitely recommended.