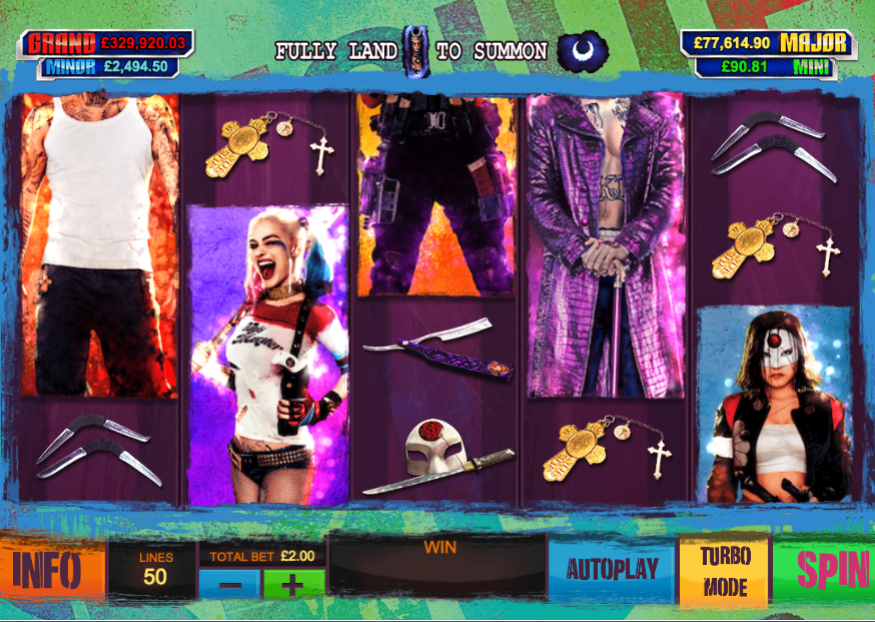 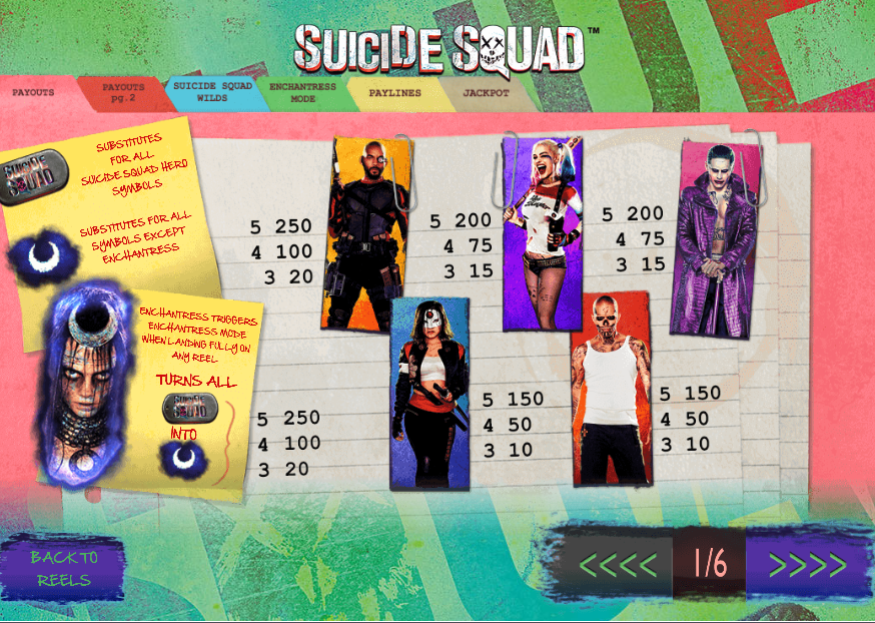 Worst. Heroes. Ever. was one of the taglines for Suicide Squad, the 2106 DC movie about a bunch of semi-criminal superheroes recruited to save the world; it’s now also an online slot based on that film and you can read all about this enjoyable game and its progressive jackpot below.

Suicide Squad is a five reel slot with four rows and fifty fixed paylines; a screeching guitar track accompanies your gameplay which takes place on a colourful set of reels inspired by comic book art.

The higher value symbols are five of the squad – Deadshot, Harley, The Joker, El Diablo and Katana – and all appear stacked on the reels while the lower values are their assorted dangerous belongings including boomerangs, a baseball bat, a sword and a cut throat razor.

We haven’t mentioned wild symbols so far because they don’t feature on the reels to begin with – wilds appear whenever a squad member fills all three positions on his/her reel; the following numbers of wilds (dog tags) will now be added to the reels:

On subsequent spins one random wild at a time will be removed from the reels.

This is triggered when the Enchantress fills up a reel and she will initially add four Enchantress wilds to all positions on that reel. All other wilds will become Enchantress wilds and lock to the reels while all wins will be multiplied by 2x. As with the Suicide Squad Wilds, one wild will be removed from the reels on each of the following spins.

Suicide Squad is part of the DC Super Heroes Progressive jackpot and you can see the Grand, Major, Minor and Mini totals above the reels. Entering the jackpot game is a random award after which you’ll get to pick from a honeycomb pattern until you’ve matched the required amount of colours to win one of the prizes.  The higher your stake, the better the chance of entering the jackpot game.

Suicide Squad is an all-action slot which channels the spirit of the film with its colour, sound and promises of lethal violence from every character every now and again; we might even go so far as to say it’s more entertaining than the movie itself – it comes with an RTP of 95.13% and the chance of a shot at the big bucks.

Tip: Don’t change your stake when the Suicide Squad Wilds or Enchantress Mode are triggered because you’ll lose all those wild symbols.