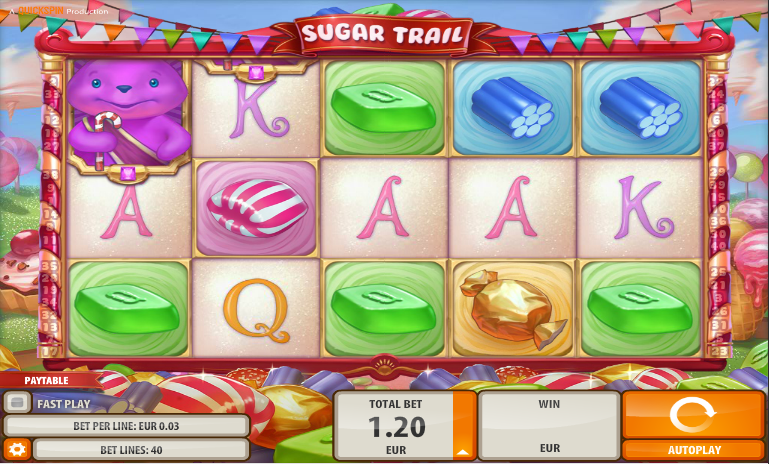 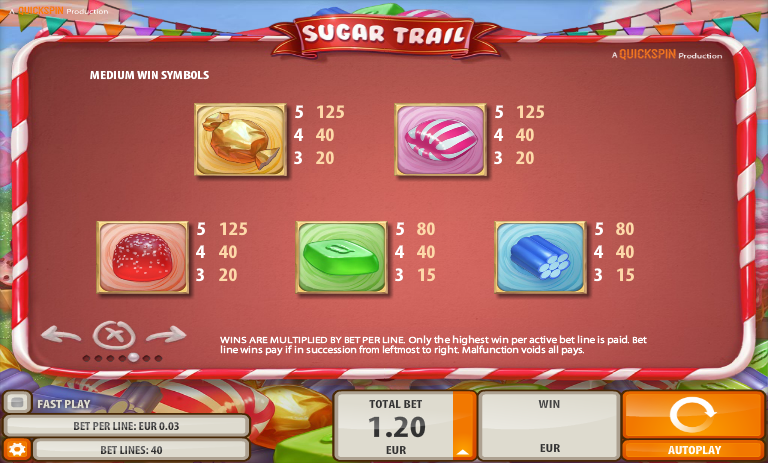 If you’re looking for an online slot which is almost unbearably cute then you need look no further than this brand new game from Quickspin. It’s called Sugar Trail and it makes your teeth hurt just to look at the wide range of sweets rotating on the reels. We would suggest that it even rivals Betsoft’s Sugar Pop in its ability to rot your molars so read on to find out how it compares.

Sugar Trail plays out over five reels and forty paylines and the setting for this slot is a fantasy land where giant ice-cream cones dot the landscape and candy floss clouds float across the sky.

There are five main symbols which are (we think) some rock, a win gum, a fruit pastille, a red stripy humbug and a gold wrapped sweet. 10, J, Q, K and A are the lower values.

The wild symbol contains all the sweets and there are three Gummy Bear scatters (purple, green and blue) which activate their own bonus games.

The purple King Gummy Bear only appears on reels one, two and three and if you land him there you will trigger this feature.

As you can see from the video above you must first spin a set of reels to determine the number of spins, multipliers and extra wilds. When the spins start, those wilds will appear in random positions on each spin, complemented by more chucked in from the side by the king. Landing the ‘+1 Spin’ symbol will award an extra spin.

Three green Queen Gummy Bear  symbols on reels two, three and four trigger this game and again you will spin the reels to determine your starting position.

During this feature the wilds symbols will be locked in place and remain there for the duration of the free spins. ‘+1 Free’ spins are again available.

The blue Prince Gummy Bear only appears on reels three, four and five and this is a simpler mini-game in which you spin the reel set but are awarded cash and multipliers with no free spins spins in sight.

The lack of player interactivity here means we can’t offer much in the way of advice but if you value your health, don’t let this game tempt you into eating more sweets.

This is an extremely likeable game and so far it’s been quite profitable for us, something which, of course, won’t last for ever. Well worth checking out though with lots of bonus features.