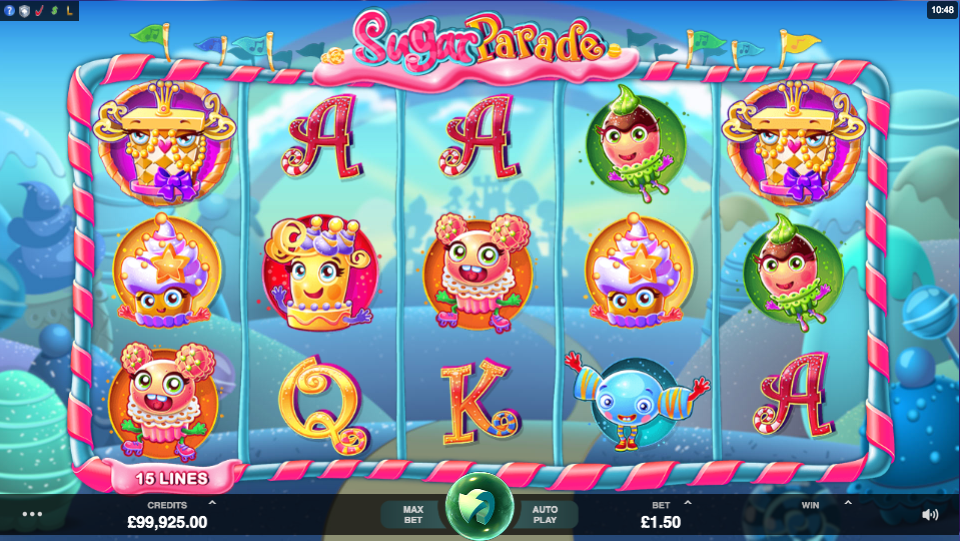 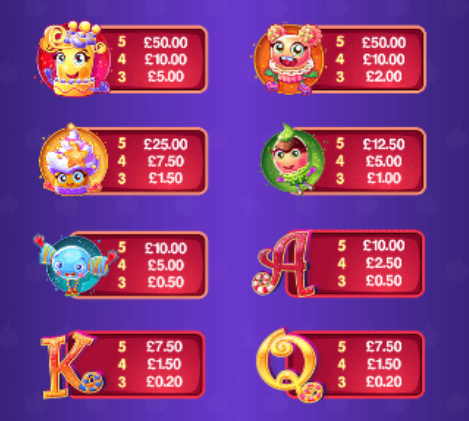 Sugar Parade is an online slot machine themed on a selection of tasty treats designed to send you back to the dentists at the earliest opportunity. It’s developed by Microgaming, it’s very colourful and it comes with two separate features m- read all about it below.

Sugar Parade is a five reel slot with three rows and fifteen fixed paylines; those reels spin within a frame of striped candy behind which there’s a view of a candy-laden landscape and a royal residence in the distance.

There are five high value symbols and they are all sugary snacks of various types but each is anthropomorphised with facial features and some with regal accoutrements; Q, K and A represent the lower values.

The Sugar Parade logo is wild and will substitute for all others to help form winning combinations except for the ice cream scatter and king bonus icons.

This is triggered by landing three or more of the king bonus symbols on a payline starting from the left hand side; you will now be transferred to a second screen and awarded three, four or five picks (depending on the number of triggering symbols) from a selection of twelve, each of which will reveal a cash prize.

Trigger this by landing three or more of the ice cream scatter symbols anywhere in view for which you will be awarded ten free spins; during this round all wins will be subject to a 3x multiplier and landing three more scatters will award ten more spins.

Sugar Parade has so much candy on show that you’re teeth will hurt just by playing it; it’s good fun though and there’s plenty to like about this slot including the two features and some refreshingly high quality graphics from Microgaming – it comes with an RTP of 97.00%.