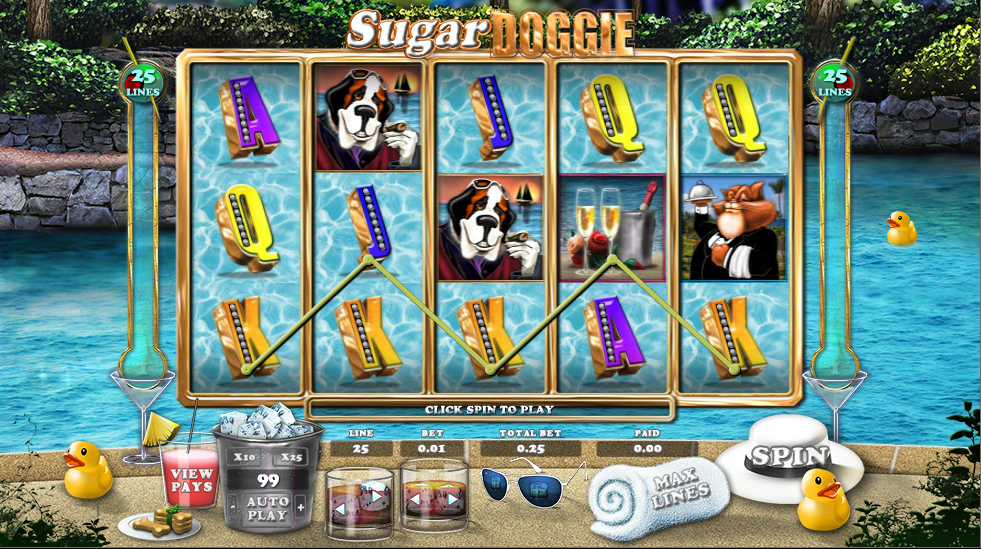 If you can visualise something like the Playboy mansion but for dogs then you’re on the right path to Sugar Doggie. It’s an online slot from Random Logic which celebrates the high life and if you think you can recover from the spectacle of bikini-clad hounds then it’s well worth checking out.

Sugar Doggie is a five reel and twenty five payline game the subject of which is anthropomorphised dogs living the good life; the backdrop to the reels is a sparkling swimming pool in a landscaped garden with a selection of drinks, ice buckets and towels in the forefront.

Playing card icons floating in the pool make up the lower value symbols while the higher values are a champagne bottle and glasses, two female dogs in bikinis, a dog butler and the Sugar Doggie himself.

The wild symbol is a glittering blue diamond and the scatter symbol is the game’s logo superimposed on a cocktail glass.

Random Logic have some free spins in store for us here but you’ll have to land three, four or five of the Sugar Doggie scatter symbols anywhere on the reels to trigger it.

You will now receive a generous fifteen free spins with the potential for some big wins at the end of them. There’s also an expanding wild feature here and this is triggered if a wild lands anywhere on the reels during the spins. All positions on that reel will now become wild and the winning paylines will be reevaluated.

The expanding wild only appears in the free spins and not, unfortunately, in the base game.

The feature is triggered by the scatter symbols so you can play the name with one payline and still have the same chance of triggering it – payouts will be proportionately less though.

Random Logic produce some really nice looking games and this is another one to add to the list. The subject matter is a bit odd but once you get past that this is a top notch slot.