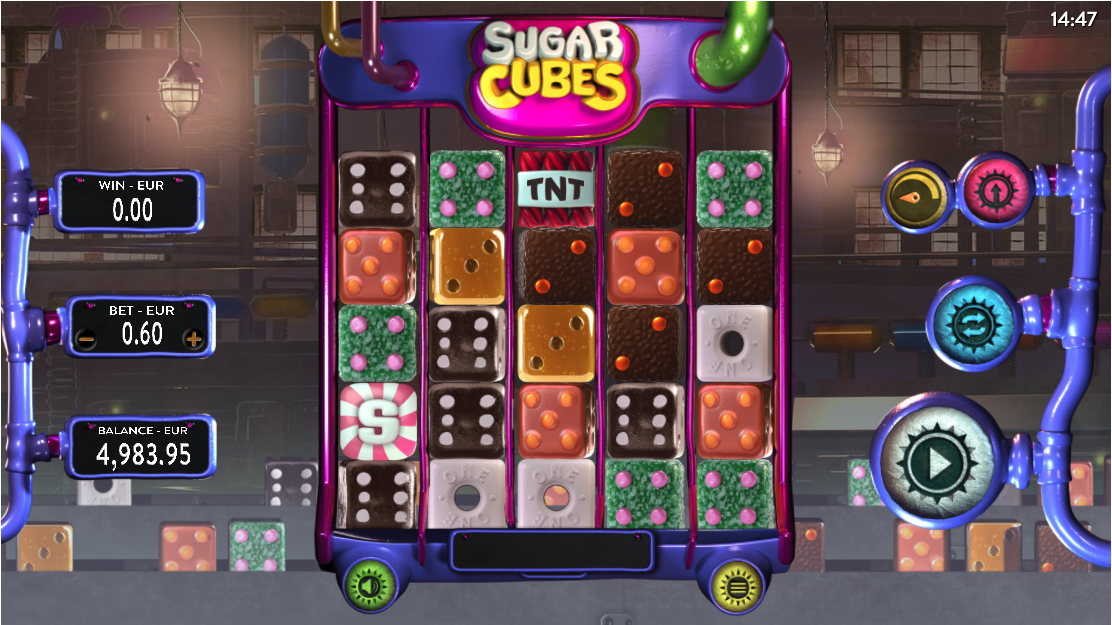 If you’ve ever wondered where sugar cubes are made then wonder no longer – Sugar Cubes is an online slot from Relax Gaming which takes place on the factory floor of one such establishment; it’s a cascade-style game which offers players multiplier wins and sugary free spins.

Sugar Cubes plays out on a 5×5 grid which hangs in front of the conveyor belts and storage shelves of this fly-blown, slightly unhygienic premises; the various gameplay options protrude from the shiny pipes on either side of those reels.

The six standard sugar cube symbols also double as dice and they appear on the reels displaying numbers one to six – your task is to create clusters of at least four matching symbols vertically and/or horizontally and the win will be equal to your stake multiplied by the number of symbols multiplied by the value of whichever dice it is (shown below).

The wild symbol is the chocolatey ‘wild’ which will replace all standard symbols to help form winning combinations.

Sugar Cubes also uses the cascade feature in which matching symbols are removed from the reels allowing more to fall in from above – more matches can then be formed and this process continues until there are no more wins.

Landing two magic wand symbols next to each other will convert all symbols in their rows or columns into the highest value one there already for a win and then the subsequent cascade.

Two TNT symbols next to each other will explode all symbols around them, paying out for each one and causing a cascade.

This is triggered by landing two of the ‘S’ scatter symbols next to each other for six free spins – each extra scatter will award three extra spins. On each spin two symbols will be removed from the reels to increase the chance of winning and with each win the multiplier value for those wins increases by 1x.

Sugar Cubes is a very attractive slot with a tasty, candy theme and some nice graphics; the Magic and Bomb features trigger regularly, as do the cascades and (for the luckier players) the free spins round. Very entertaining!