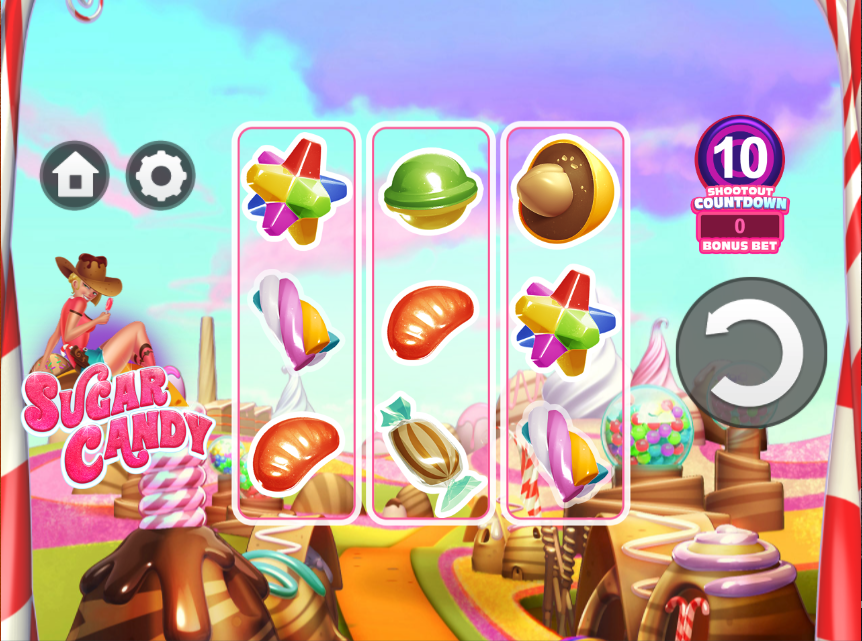 There’s a danger of tooth decay right, left and centre for those willing to check out this candy-themed online slot from Gameiom; it’s called Sugar Candy and it features three reels which expand to five whenever there’s a winning combo – read on to find out more.

Sugar Candy is a three reel slot with three rows and fifteen fixed paylines; there are pink and white borders around those three transparent reels through which we can see a landscape formed from sweets, chocolates, cake and the like. A cheerful girl watches over proceedings from the left hand side.

There are eight sweet-themed symbols including a multicolour gobstopper, a chocolate-covered nut, a cola cube, a lolly and a humbug.

The girl is wild and she will replace all others to help form winning combos except for the Free Spins and bonus symbols.

This is the complicated name given to the transformation of three reels into five whenever there’s a winning combo; it offers the possibility of more wins and explains why there’s fifteen paylines.

This is triggered by landing three or more of the Free Spins scatter symbols anywhere in view for which you will receive the following:

More spins can be triggered an unlimited number of times and all wins during this feature are doubled.

The bonus symbol only appears on reel three but each time it lands the Shootout Countdown on the right hand side will be decreased by one; additionally 10% of that spin’s bet will be added to the Bonus bet total.

You will now receive three free spins in which to match and eliminate three jelly bean symbols; prizes are as follows:

Sugar Candy is certainly an intriguing slot with that clever reel feature and two separate bonus games – not too shabby for a three reel game. It’s a smooth, high quality design and it comes with an RTP of 95.70%.