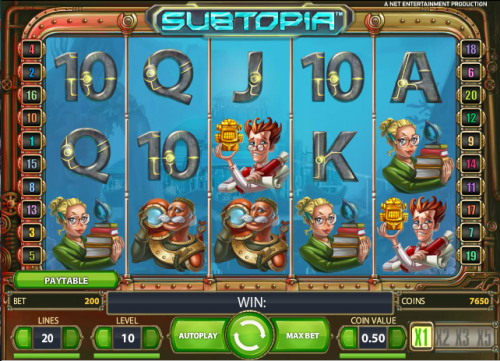 It’s always a good day when there’s a new Net Entertainment online slot to review and apparently today is such a day.  Subtopia is a new slot from Net Ent based subterranean life.  One could draw similarities with the journeys of Captain Nemo and his Nautilus submarine but there are enough individual characters here to make a new story.

This is a five reel and twenty payline slot set in some sort of submarine; the reels spin on a window which looks out on an underwater city.  Net Ent uses standard playing card symbols for the low value symbols but there are a range of well-drawn characters as the high value ones.

We have a purple-haired engineer, a moustachioed diver, a blond scientist, the captain and another red-haired scientist.  The scatter symbol is a compass and the wild is a golden icon.  Additionally there’s a random multiplier symbol which appears in the main game.

This is the main bonus game and it’s triggered by landing three, four or five of the compass scatter symbols anywhere on the reels.  The number of spins you receive in this round are theoretically unlimited but will end when the Multiplier Meter stops on the skull and crossbones symbol.  The meter is located to the bottom right of the reels.

You can see from the video below that the meter randomly changes between a multiplier of 2x, 4x and 6x before eventually resting on the skull and crossbones.  Sometimes this can be a lucrative bonus game and sometimes not so much or at least that’s our experience.

There’s never much wrong with a Net Ent slot machine and Subtopia is no exception; the underwater settings look lovely and the soundtrack of sonar bleeps and industrial noises excellently complement the graphics.