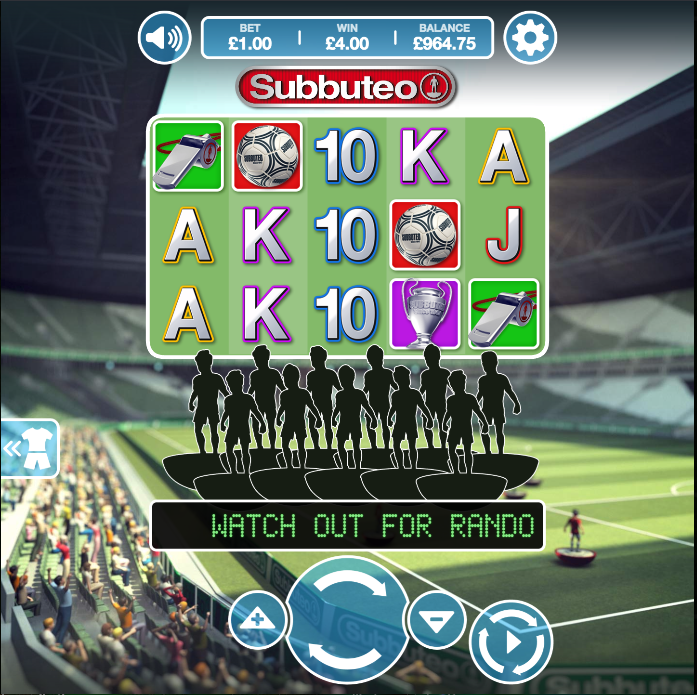 If you had a childhood in which Subbuteo was the most popular pastime among your friends but you never really understood the attraction then you’re not alone; however you now have the chance to relive the odd gameplay with this online slot from betdigital – it’s called simply Subbuteo and it’s much more entertaining than original game.

Subbuteo is a five reel slot with three rows and twenty fixed paylines; underneath the freshly-mown reels are eleven plastic players whose purpose will become clear shortly. A huge stadium forms the backdrop to all the action.

When the game first starts you’ll be prompted to pick the name for your team from a list of names along with the kit colour.

The higher value symbols include the Subbuteo logo, a silver trophy, the referee’s whistle, a football and a pair of boots; 10, J, Q, K and A make up the lower values.

The crowd scene is wild and will replace all others to help form winning combos except for any special symbols.

Some symbols are overlaid with your teams’ badge and whenever one lands it will light up one of the players below the reels; when all are lit the free spins round is awarded. When seven players are lit it’s possible to buy the free spins round early for a cost proportionate to your stake.

You’ll now receive eighteen free spins, each worth five minutes which of course totals ninety minutes in all – the length of a match. During these spins the opposition may score and you may be awarded the following mini-features:

If the match ends in a draw it’s time for extra time in which six more spins are awarded; if it’s still a draw then a penalty shootout starts with a prize of 5x your stake for each goal scored.

The following mini-features may be awarded at random after any spin:

We can say for sure that the slot version of Subbuteo is far more enjoyable than the original game and it comes with the potential to earn a bit of cash too; there’s lots going on here including plenty of extra features, some perfect graphics and an RTP of 96.00%.