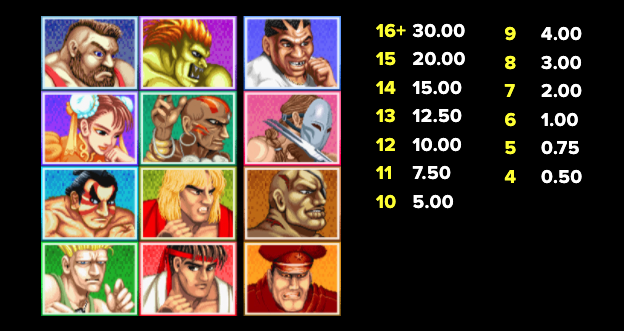 Street Fighter 2 brings back plenty of memories as the video game of choice for those of a certain age with its roster of now famous characters and the backdrops in which they fought; Street Fighter 2: The World Warrior is an online slot from Net Entertainment themed on this and it comes with lots of clever features and the option to pick and play with your favourite fighter.

Street Fighter 2 is a five reel slot with five rows your task is to create horizontal and/or vertical clusters of at least four matching symbols; when you first load up this game you’ll be prompted to select one of the eight playable characters – Ryu, Ken, E. Honda, Chun Li, Blanka, Zangief, Guile and Dhalsim – to determine the style of gameplay.

There are twelve characters in total in play here and each has two versions – one victorious and one defeated (bleeding and/or crying); J, Q. K and A make up the numbers. The character symbols can also appear as large, 2×2 icons.

The character you select to begin with will affect the variance of this slot as shown in the picture below – win often or win big; once that’s out of the way the game begins with your chosen fighter to the left of the reels and a randomly selected opponent on the other side. The only high value symbols in play are your and your opponents victorious and defeated ones and each time a cluster is formed some of the opponent’s life will be drained away (the meter above the reels). Winning symbols will be replaced by more falling in from above.

Winning symbols will also count towards filling up the meter above your fighter and when this is full he or she will add extra wilds onto the reels in their own manner.

When one of the meters above the reels is depleted you’ll trigger that particular bonus:

Beat the Boss Free Spins – awards free spins over four levels in which you must defeat Balrog, Vega, Sagat and M, Bison; the round ends when all four have been defeated or you have lost all your life. Win multipliers increase with each level.

Car Smash Bonus Game – here you’ll get the chance to move your character around and smash up the car with a variety of punches and kicks, leading to its ultimate destruction and a prize of between 5x and 15x the stake. 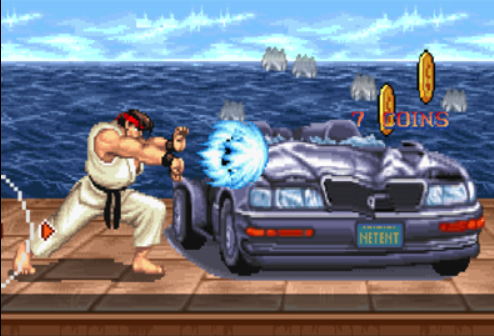 This slot is everything you could possibly want from a game based on the famous Street Fighter 2 video game – the graphics and animations look identical and the themed bonus features are well designed and implemented. It’s worth noting that the RTP differs very slightly depending on the character selected: