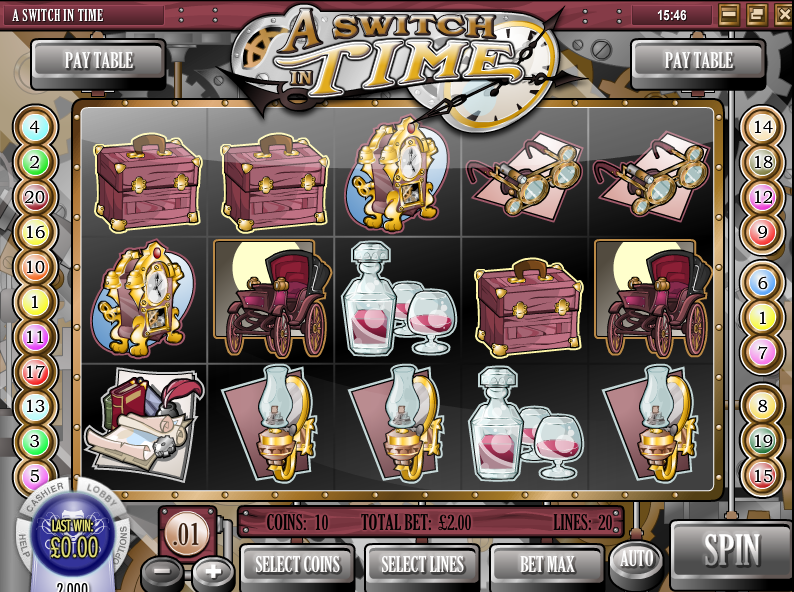 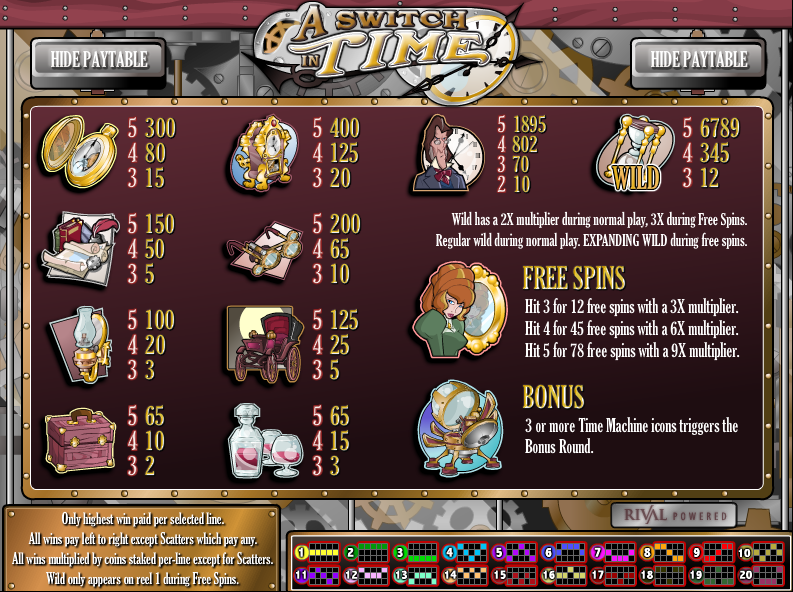 There’s a touch of the nineteenth century about this good-looking online slot from Rival Gaming; it’s called A Switch In Time  and it’s full of references to time and various other Victorian objects. It’s one of Rival’s i-slots range which means more player interaction and a more complete gaming experience than the standard range. Make sure you watch the intro movie the first time you play the game to understand that this is all about time travel.

A Switch In Time plays out over five reels and twenty paylines and the you immediately feel as if the game has been influenced by H. G. Wells. The inner workings of a timepiece fill the background and there are some nicely-frawn symbols. They include a bottle of port, a suitcase, a vintage car, a gaslight, a pair of elaborate specs, some paperwork, the time traveller, a clock and a pocket watch.

An egg timer is wild and there are two scatter symbols – the woman and the time machine which each have their own feature attached.

The sultry-looking woman is the key to the free spins and landing her anywhere on the reels will reward you with the following:

(Do those spin amounts sound like vinyl record sizes?)

During the spins the wild will expand to fill all positions on it’s reel if it lands, meaning more potential winning combos.

A Switch In Time Bonus Round

Three or more of the time machine scatter symbols will trigger this feature; as you can see from the video above you will be prompted to choose a number of the buttons on the machine. Each will be worth a prize but each will also move the needle a little further towards the past. When the needle reaches it’s limit the round will be over but you will now be playing in the past with a new set of reels.

You are now in prehistoric times and the only way to get back is to land three more scatter symbols to play the feature again.  There’s also a cavewoman here who is the key to 10, 25 or 50 free spins. The wild is a fire and all the other symbols are of a prehistoric nature.

Both of the features are triggered by scatter symbols so you can select as few paylines as you wish with the same chance of activating those games. Prizes will of course be less though.

This is a great game and it’s a good advert for the i-slots range of games – it’s almost like playing two games in one with the past and present modes. The bonus feature are well-designed and there’s nothing wrong with the soundtrack either.