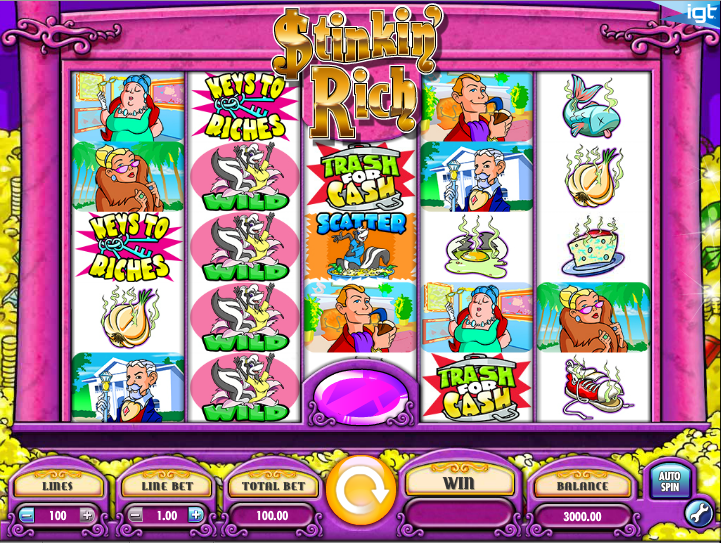 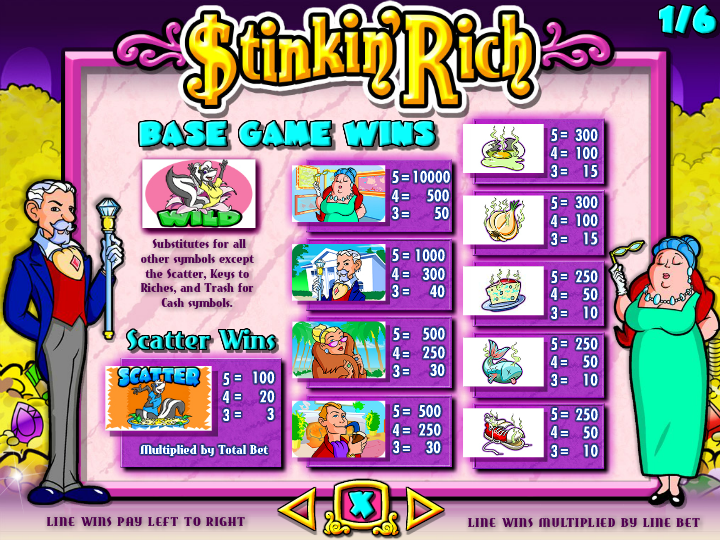 Who among us doesn’t want to have so much money we don’t know what to spend it on? Whether playing an online slot machine is the way to achieve those riches is another matter but why not give it a go by playing Stinkin’ Rich, an IGT release which combines the theme of money with lots of smelly items – you can read all about it in more detail below.

Stinkin’ Rich is a five reel slot with four rows and up to 100 paylines; this is a remastered version of the original game which is why the graphics look a little dated. The reels spin on a pink marble background and there’s an energetic soundtrack to accompany your gameplay.

The highest value symbols are four rich-looking characters and the cheaper counterpoints are the five smelly items – a rotten egg, a garlic clove, some ripe cheese, a rotting fish and a well-used trainer.

The wild symbol is represented by the potentially smelly skunk and it will substitute for all others except the male skunk scatter and two bonus icons – Keys To Riches & Trash For Cash.

This is triggered by landing three of the Keys To Riches bonus symbols on an active payline on reels one, two and three; five spins are awarded and landing those symbols on two paylines will double the number of spins handed out; on three paylines triples them, etc.

Trigger this by landing three of the Trash For Cash symbols anywhere on reels three, four and five; this is a picking game so all you need to do is select one of the icons for a cash prize of between 6x and 40x your total bet.

Stinkin’ Rich is almost a nostalgic look back at an older IGT slot but it’s still good fun despite it’s graphical limitations; trigger the bonuses and there are some decent wins there and it comes with an RTP of between 92.52% and 96.23%