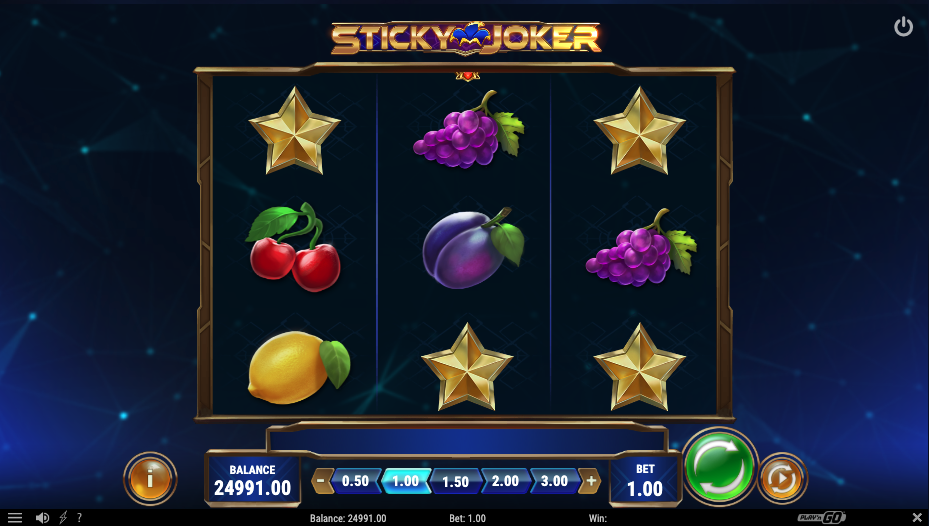 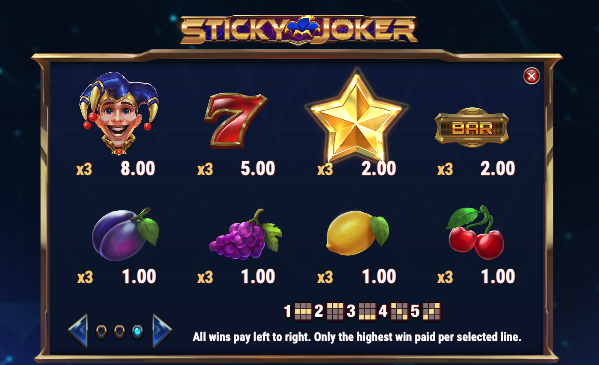 It’s time to get back to basics with some fruity reel spinning action courtesy of Play N Go and lots of shiny symbols – this is an online slot called Sticky Joker and hiding behind those three reels there’s a clever bonus feature involving a Wheel of Multipliers.

Sticky Joker is a three reel slot with three rows and just five fixed paylines; those reels are surrounded by a neat frame behind which floats against a backdrop of hazy blue lights, twinkling and roaming in the distance.

The symbols are all related to the theme and include the cheery Joker, the red seven, the gold star, the golden Bar, the plums, the bunches of grapes, the lemons and the cherries.

The Joker is also the wild symbol, he’ll substitute for all symbols to help form winning combinations and he’s also the key to the big feature, described below.

The Joker symbol is the gateway to all the good stuff in this slot and each time he lands on the reels he will freeze in place and trigger a respin – this will continue as long as more wild symbols land on the subsequent spins.

If at least four wild symbols are on the reels when this sequence ends (or all positions are filled with Jokers) then you’ll receive a spin of the Wheel of Multipliers which will award a multiplier value of up to 10x your winnings up to a maximum of 1650x the stake.

Sticky Joker is a slick, fast-moving and high quality slot machine from Play N Go in which the wild Joker pops up regularly enough to trigger the feature and keep things interesting. The only downside is a slightly low RTP of 93.05%.