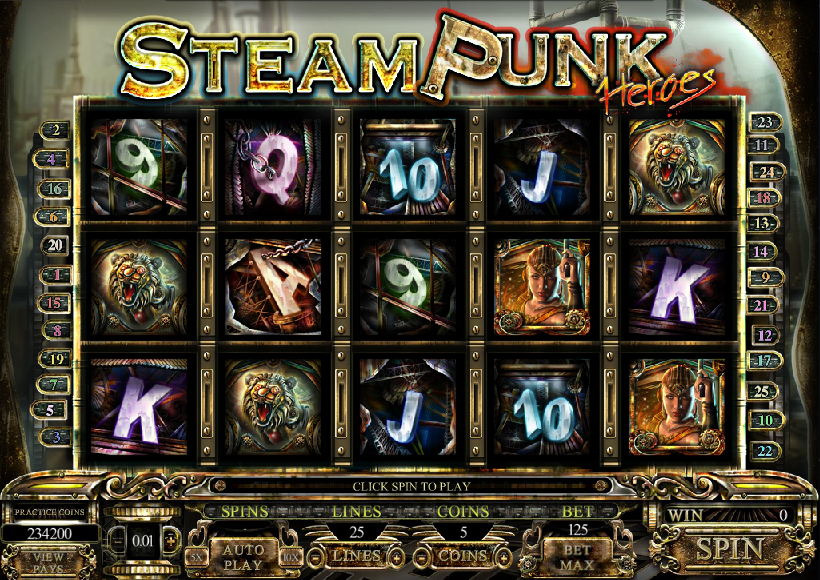 Steampunk is an odd little genre; it’s a science fiction sub-culture which is based around machinery powered by steam and is often set in an alternative Victorian Britain.  With the Steampunk Heroes online slot, Microgaming have taken on the challenge of producing a steam punk themed game and have actually done a pretty good job.

This game features five reels and twenty five paylines and the whole thing is designed in a beautifully mechanical way which demonstrates a decent understanding of the genre.  The reels are encased in metal and placed against a background of fog, pipes and industry.

The main symbols are a variety of steam punk-inspired designs along with a gun-toting Steamgirl – presumable one of the heroes of the title.  Minor symbols are metallic versions of 9, 10, J, Q, K and A.  The symbols animate in a really impressive way when they create winning combos.

As far as bonus symbols go there’s a Steam Punk Heroes scatter and a wild with metallic W, I, L and D. 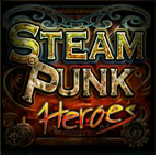 There’s a two-part bonus game in this slot which ends in a certain number of free spins and multipliers.  To being with you’ll need to land three or more of the Steam Punk Heroes scatter symbols anywhere on the reels and then you’ll be taken to a screen with two gear levers and lever.

Pull this red lever and the gears will slowly turn, eventually coming to a stop and revealing a number of multipliers and free spins.  When the screen changes back to the reels just click the ‘Spin’ button in the bottom right hand corner to start the spins.

You can also re-trigger more spins by landing three more scatter symbols here – check out the video below to see it all in action.

This slot will appeal not only to sci-fi fans but to any players who appreciate a top quality game; the music complements the gameplay nicely and the graphics and animations are a decent representation of the steam punk genre.