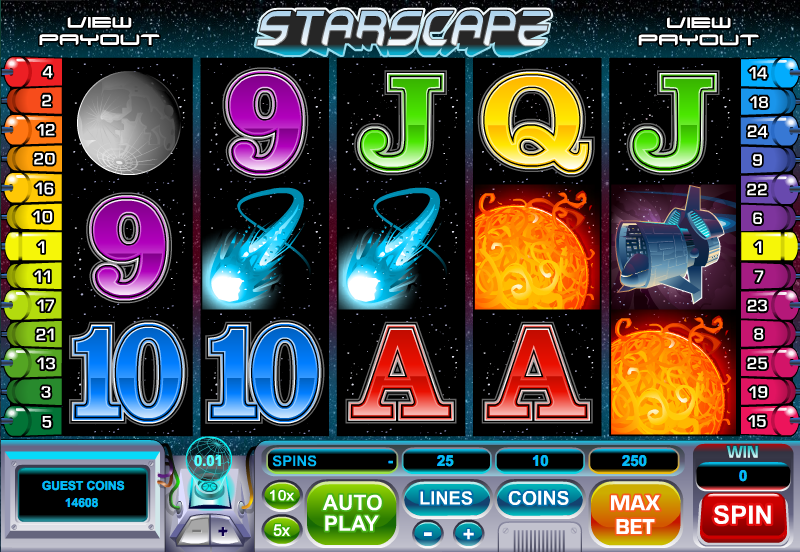 We’re heading into the depths of space to play this interplanetary online slot from Microgaming; despite being set in the gloomy endless vacuum it’s actually quite a colourful gaming experience and it joins a number of other releases from various developers, all pointing to the stars.

Starscape plays out over five reels and twenty five intergalactic paylines and the transparent reels are set against a backdrop of stars – thousands of stars which light up a scene which would otherwise be jet black.

The standard 9, 10, J, Q, K and A make up the lower value symbols but a range of space-themed objects make up the more valuable ones; we have the moon, a blazing blue comet, Mars, Saturn and then the sun.

The Starscape logo is the wild symbol which will pay 7000x your line stake if you can land five on a winning payline; it will also double the winnings of any combinations to which it contributes.

The scatter symbols is a spacecraft and this will activate the main feature.

If you were expecting the standard free spins round here then you would be mistaken; the feature is triggered by landing three, four of five of the little spaceships anywhere on the reels.

You’ll now be taken to a screen featuring a grid and all you need to do is pick the spaces until you’ve found four matching symbols. Depending on which set you complete, you will be awarded a cash prize of a certain value. You may also uncover a multiplier which will obviously help your total prize.

If you’d just like to play for the feature then you can reduce the paylines to one and still have the same chance to trigger the game because the scatter symbols will still be active.

There’s nothing particularly exciting about this game so unless you’re a real space slot aficionado there’s no reason to hang around. There are better examples around such as Net Entertainment’s Big Bang.