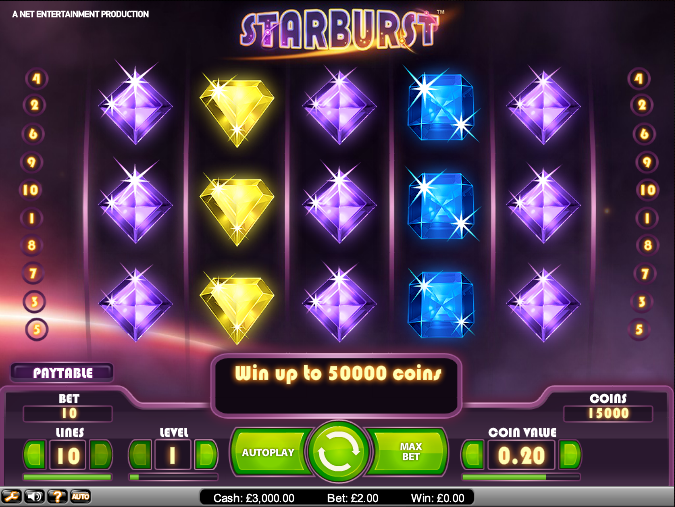 Net Entertainment have an impressive tradition of designing and implementing some great looking online slot machines and Starburst is no exception.  As far as we’re aware there are no connections to Opal Fruits (that’s a bad joke which will only mean something if you’re over 30) but the game is well worth some of your time.

Starburst is a five reel, ten payline machine but don’t let that meagre ten paylines put you off, this slot offers several features which more than make up for any payline deficiencies.  Some of the symbols are sparkling jewels which look fantastic on an HD screen; there are five  jewels coloured purple, blue, orange, green and yellow in ascending order of value and the standard ‘seven’ and ‘bar’ symbols familiar to fruit machine aficionados.  The Starburst symbol is wild.

You will note that there are not many symbols in total and this means they crop up more often in prize winning combinations, negating the issue of just having ten paylines.  You can also win money if you land blocks of symbols – for example nine in a triangle shape starting from the top or bottom corners.  One of the biggest advantages is the ability to win prizes from left or right and it may be coincidental but we’ve won the vast majority of our spins from right to left.
The Starburst symbol is wild and appears on reels two, three and four; it’s an expanding wild which covers all symbols on it’s reel and it also provides a free spin. What this means is that you’ll get the benefits of the wild on the first spin and then again when it freezes in place for the free spin.

There are plenty of options for those on different budgets; you can bet £0.01 for one spin with one payline or £100 per spin with levels and paylines maxed out. Starburst is an addictive and faintly hypnotising game which we have no hesitation in recommending.