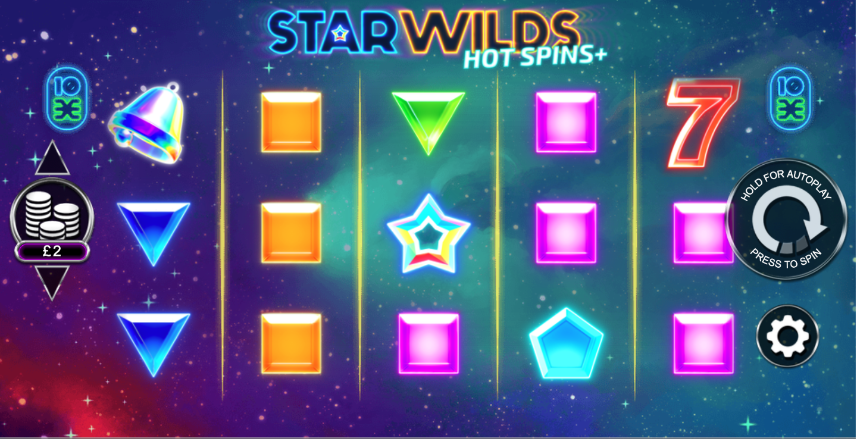 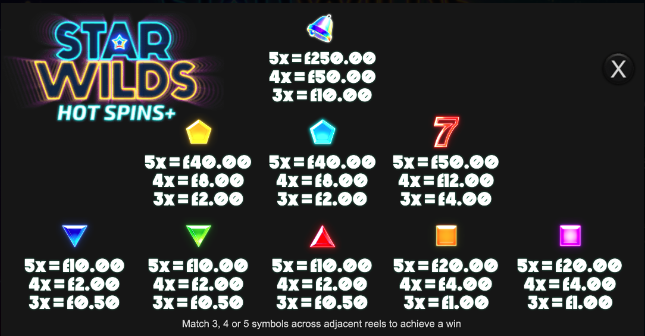 Star Wilds Hot Spins is a five reel slot with three rows and ten fixed paylines; the sparkling gem symbols spin on transparent reels against a backdrop of the night sky, dotted with stars and galaxies vast distances away.

The two highest value symbols are the bell and the red seven and they are followed by an assortment of gems in yellow, light blue, dark blue, green, red, orange and purple.

The multicolour star is wild and it will substitute for all other symbols to help form winning matches.

This is triggered each time you land a win in the base game which is worth at least 4x the total stake and when this happens you’ll see the reels split into four separate sets.

The money won in the base game is now the bank for this feature and all four reels will spin each time you press the button (or use the Autoplay) feature. The reel sets spin in order from top left to bottom right and any wild symbol appearing will copy itself to the corresponding position on the next set.

You don’t have to play the Hot Spins and it’s possible to just collect the winnings instantly but bear in mind that the RTP increases from 95.93% in the base game to 99.83% for the feature.

Hot Spins will end automatically when 100 spins have been played or if the bank amount falls below 4x the total base game stake.

Star Wilds Hot Spins may look a little on the basic side but it comes with a compelling and well-designed feature to enjoy – we recommend always playing the Hot Spins feature to take advantage of the higher RTP.